The trek begins! Via San Francesco

I want to start with some photos of Rieti, a small city in the very center of Italy. Here’s the proof! 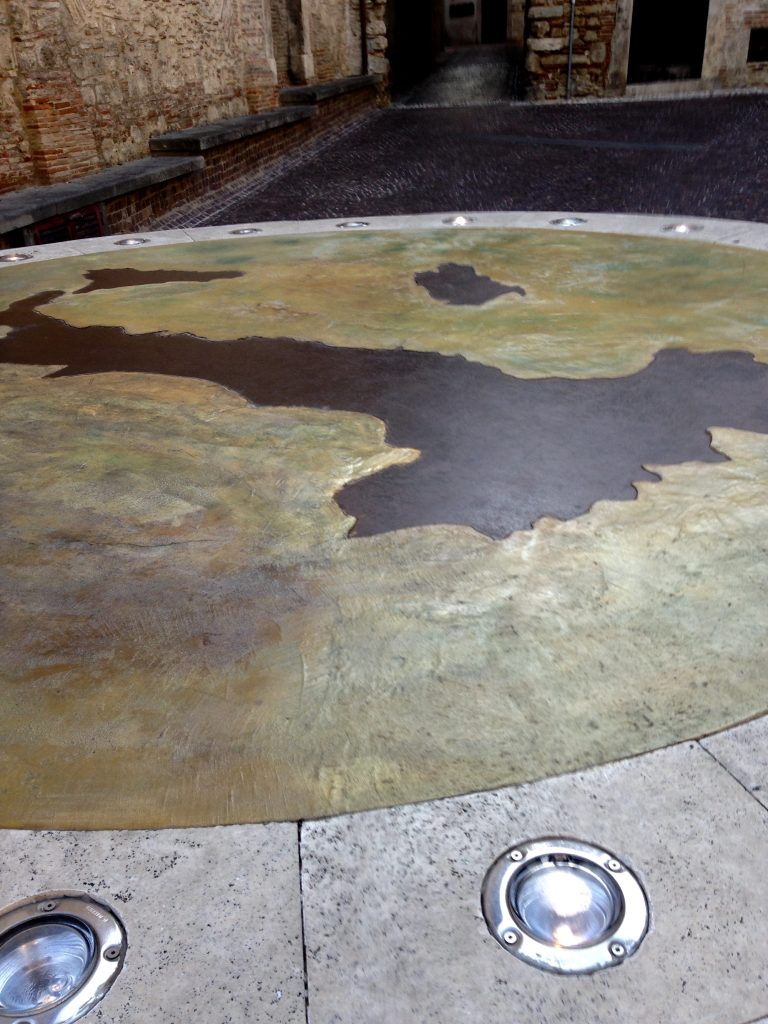 Rieti is the exact center of Italy, so is known as the “umbilica” –as this huge belly button honors not far from our hotel. 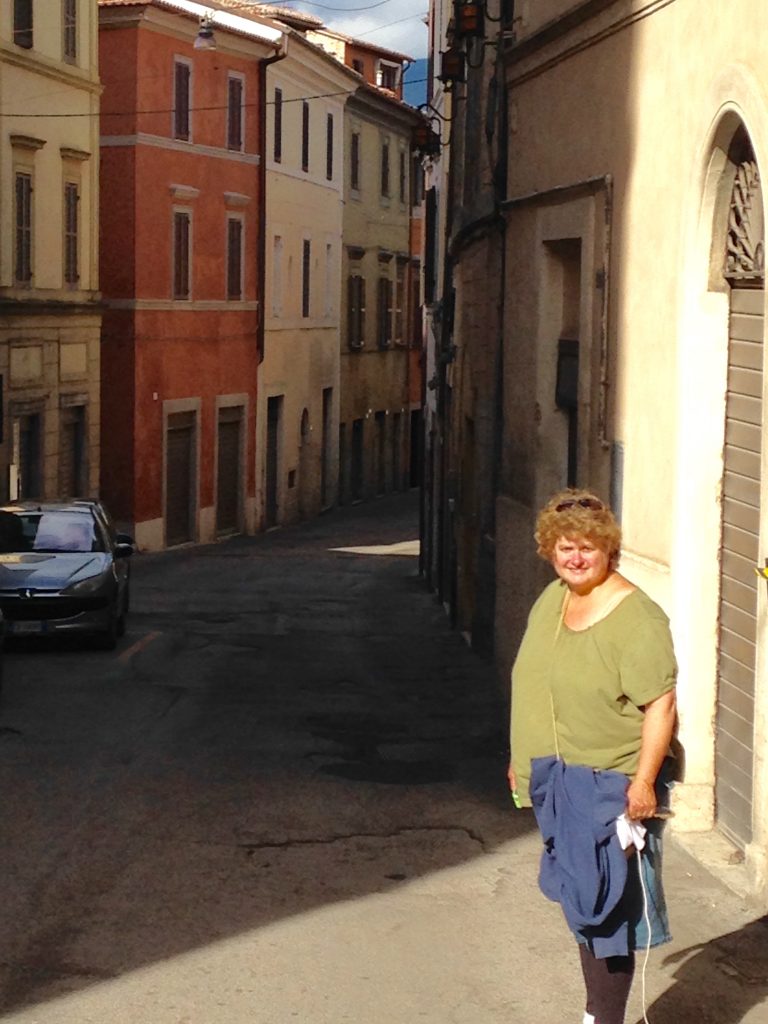 It turns out most businesses are closed on Mondays, so Annie and I had to settle for beer and shared chips (we missed lunch) instead of get the gelato I craved. But the beer was fine!

And here we see our first real references to the man himself: St. Francis of Assisi. This is where we join the Camino, the via… its called many things. If we had time, we could have trekked up to the mountains near here where St. Francis meditated and perhaps died. It turns out when he died they discovered stigmata  on his body. He had not revealed this before because he had not wanted to make people feel uncomfortable. 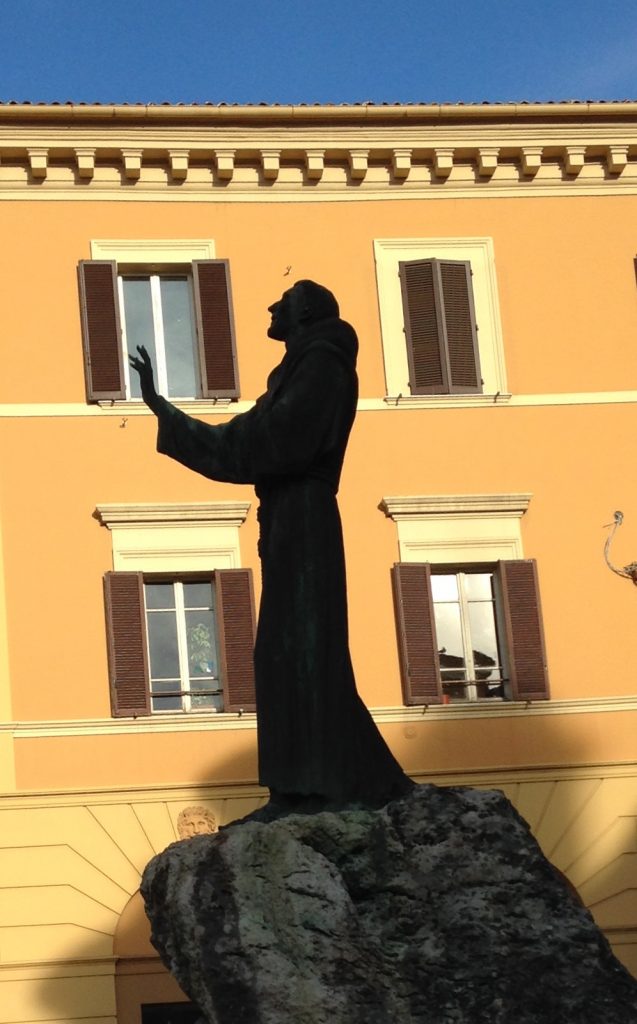 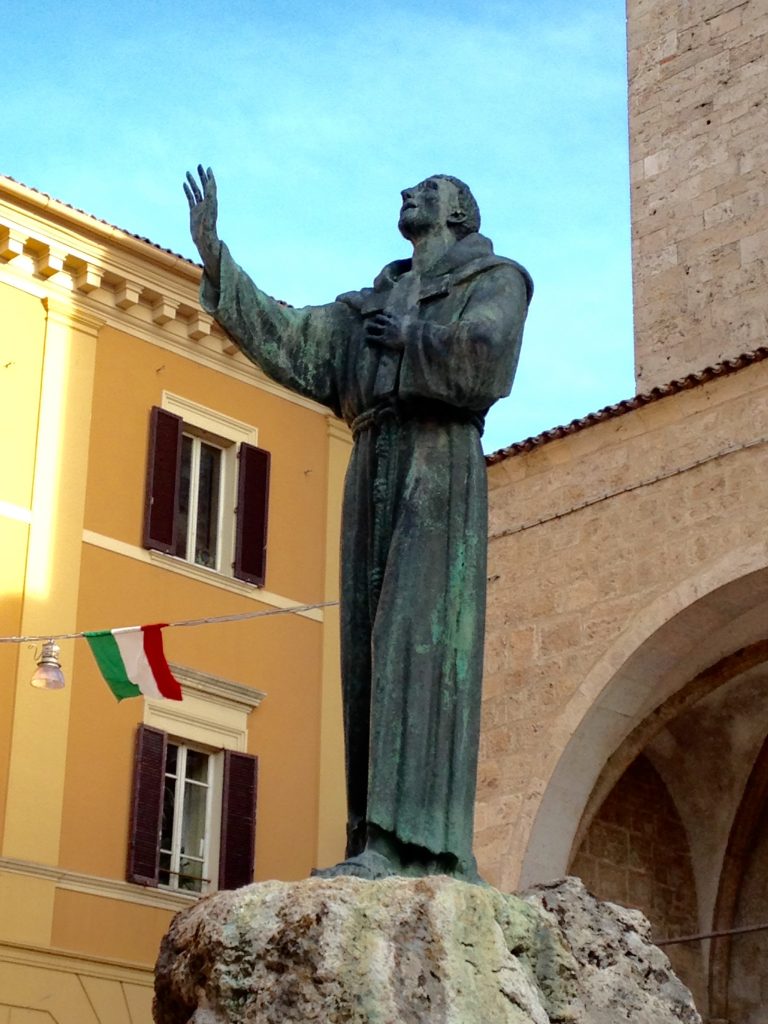 Saint Francis again, his austere kindness showing in more light. A good man to try to follow at least a little in his footsteps

I’m exhausted now, after 7 1/2 hours of hiking/walking over flatland, up hills, down dales, by highways, on asphalt roads, over roads created by tossing down large rocks, scattering the surface with smaller pebbles, then running over it with a semi able to create exciting ruts throughout. 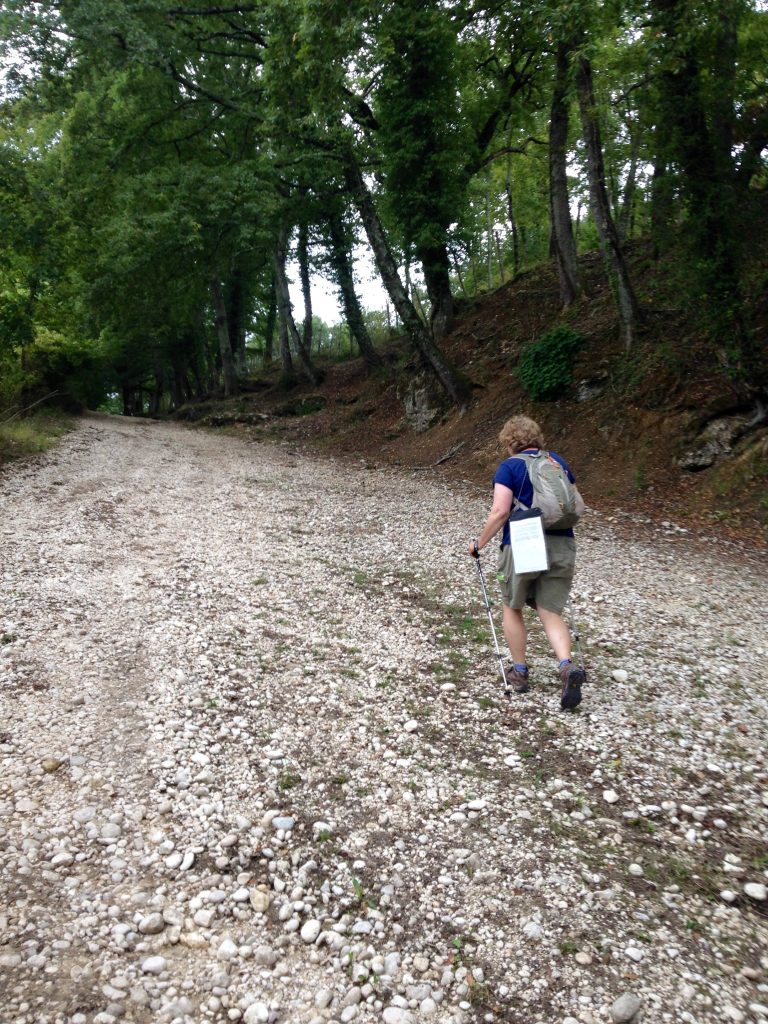 This is one of the wider, smoother paths we were on, not counting actual roads. I found myself craving mud.

We traversed streams, picnicked next to a first century Roman bridge, 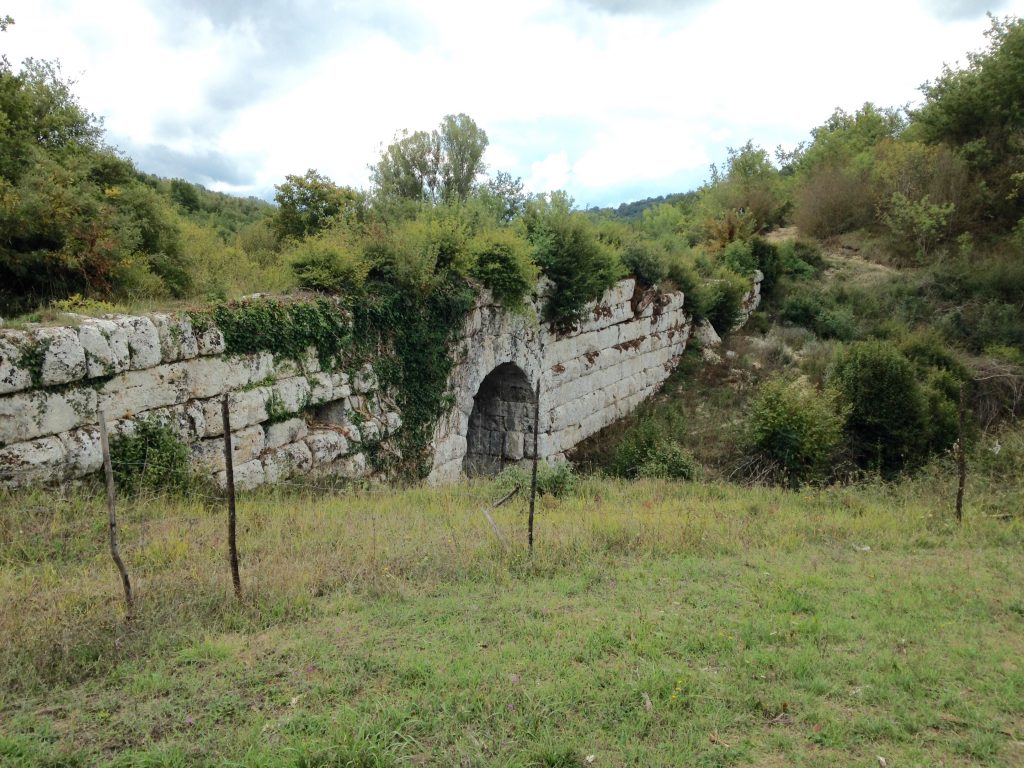 and saw one other hiker with poles, but he was not on the same via we were. Plus he was German and could not help us with our confusing directions. At one moment we passed by a taciturn woman standing next to a large pile of smelly garbage in the middle of nowhere, but that was pretty much all the humanity we came across, if you don’t count the drivers who neither slowed nor veered, but also did not hit us. 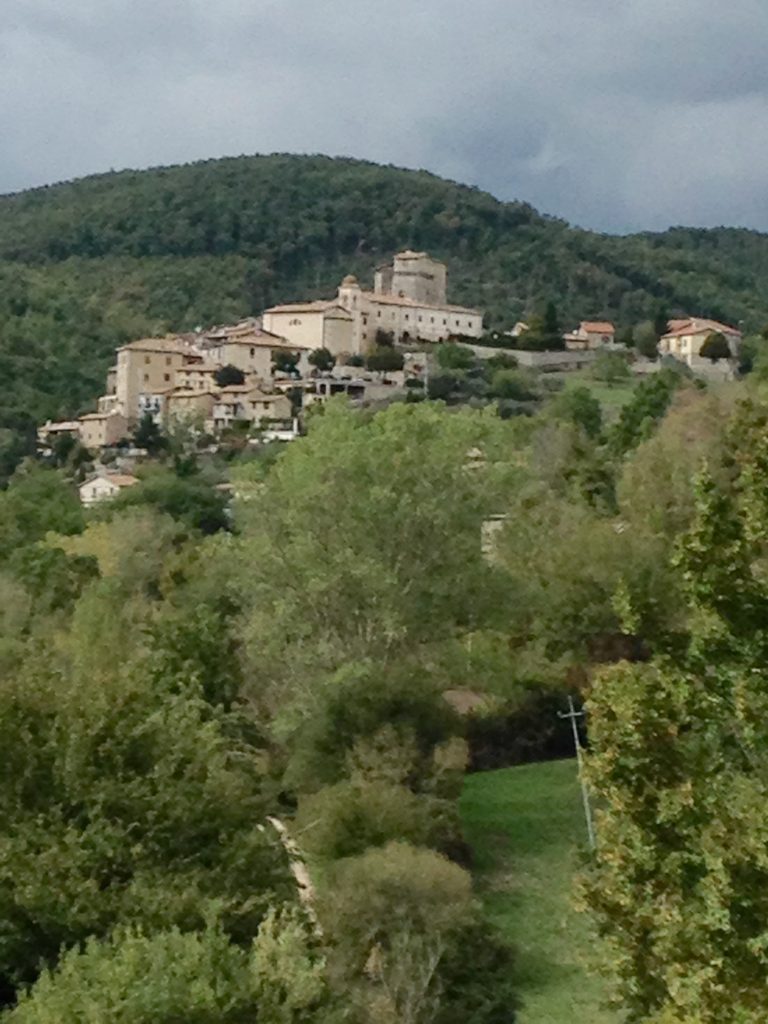 One of the views on our walk. Pretty, isn’t it? Luckily, Annie noticed so I turned around to look also.

It was a glorious day and we did it! Yay feet and arms and legs and hips and general joie de vivre.

Near the end of the walk, Annie and I started singing: Both Sides Now, They Call the Wind Mariah, Tall Pine Trees Growing, plus a little bit of Belly Up to the Bar, Boys–stuff I haven’t sung since we were kids.

Dogs barked, but then they barked when we didn’t sing also. We had to stop regularly to consult directions that didn’t always make sense, and therefore we went on faith much of the time, which is of course appropriate considering the path. And we gave a grateful huzzah each time we saw the pilgrimage sign. 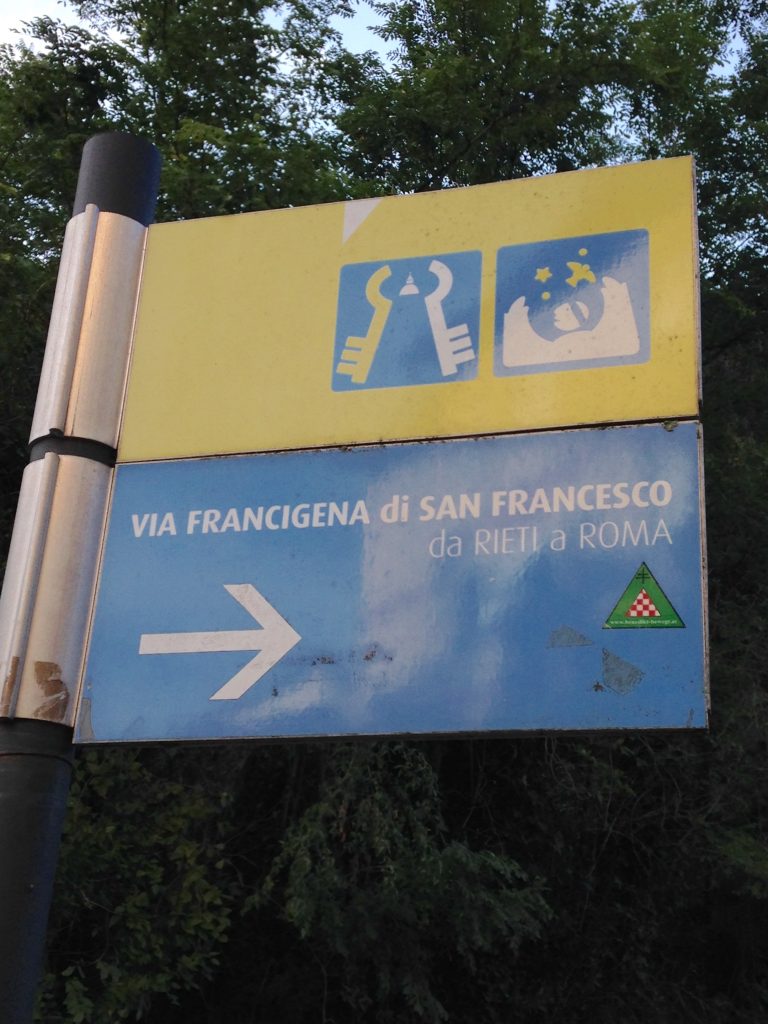 And now we are at the hard to reach but so peaceful Agriturismo Santa Giusmo on the outskirts of Poggio San Lorenzo, said to have 578 residents, but who’s counting? We are the only guests, but one of the family brought us a large beer to share. The swimming pool felt like someone had dumped cubes of ice into it along with a large bug population, but I went in anyway. The hot shower afterwards felt might fine, my friends. 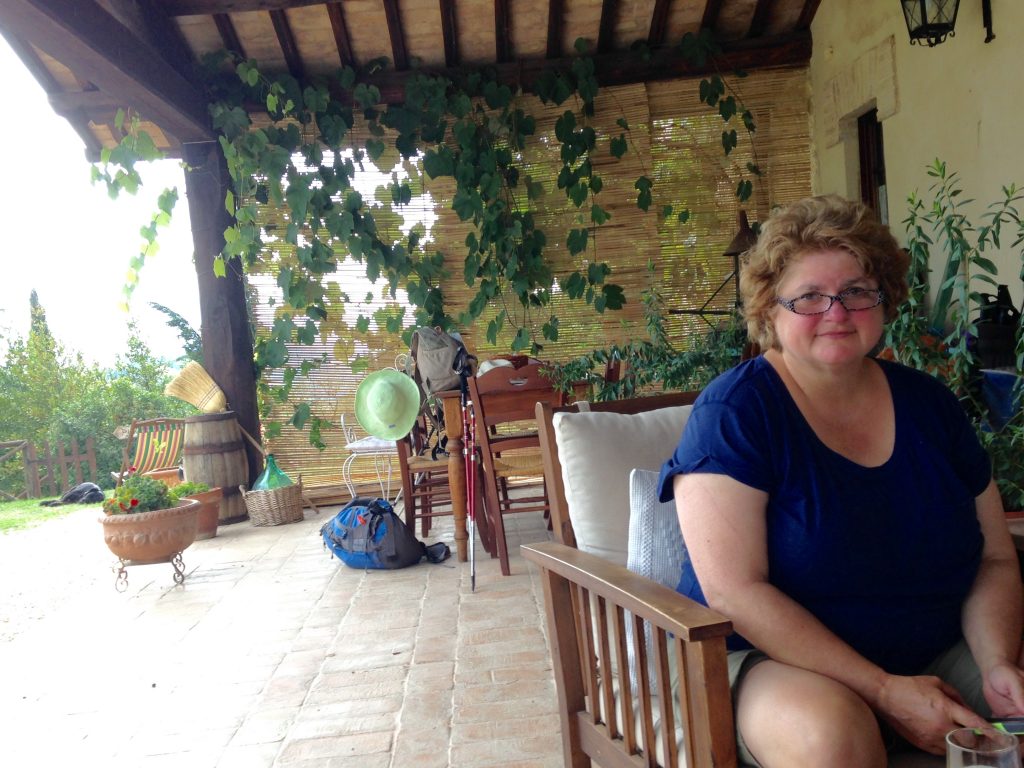 Pretty place, and we are mighty tired. And so grateful to collapse!