Leaving Monterotondo was much nicer than entering it. The sun shone, we were not worried about getting lost, I had slept long and hard. There was a coffee machine, so I could grab my two caffe lattes without annoying a waiter. Well, that’s not strictly true. He was in a sour mood, sighing heavily, no smiles, rearranging everything we touched after we went by, polishing silver, that sort of thing. Poor guy was the same waiter we saw the night before at dinner. Knowing how late the evening meal goes around here, he has to have been exhausted to open up at 7 am. I was cheery after a million hours of sleep, so I forgave him his cranky neuroses.

Before we left town, we were reminded it was Saturday–Saturday market day! 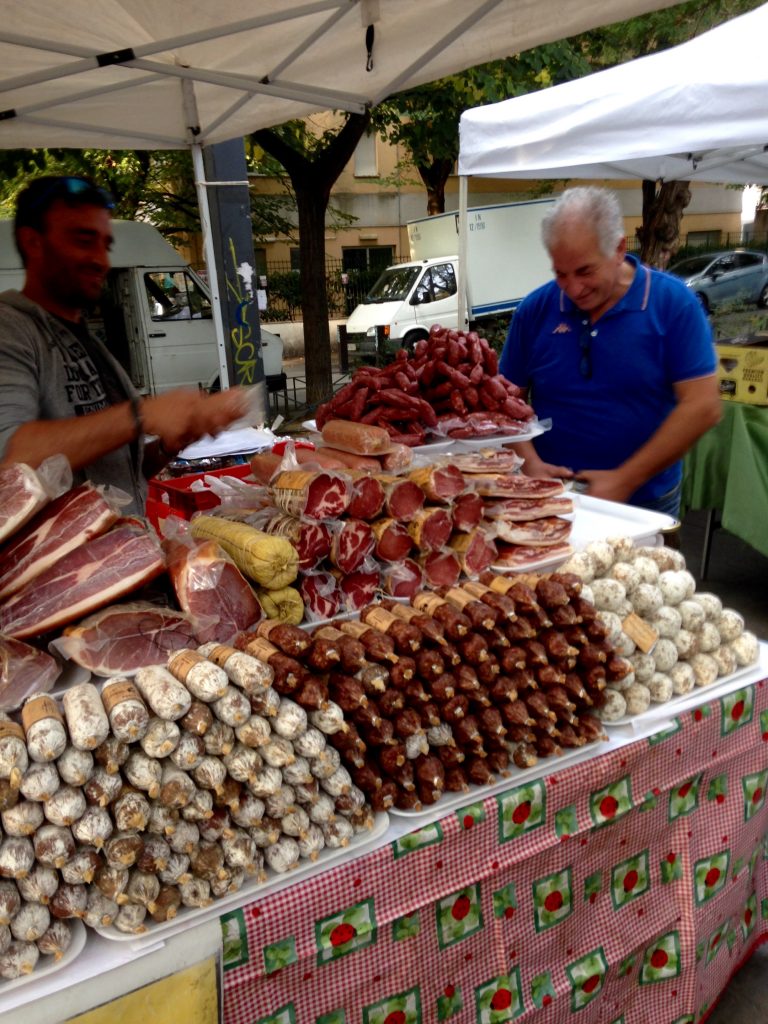 A side note on food. When we were at the castle, we met a charming couple who were vegan. While we adored the castle food, they hated it, because vegan in Italy? Are you crazy?  Although I know people eat vegetables and have seen them for sale, pretty much all we’ve had in that area are tomatoes and lettuce. Okay, some basil leaves. A lot of pasta with milk and cheese and egg and cream and bacon. This is the lands of carbanara after all. Yum! They counteract this load of richness by serving their bread dry. I have learned to horrify servers by asking for butter. Salads are seldom dressed, but they’re happier to bring olive oil, balsamic vinegar and salt to the table. In this way, perhaps vegans can survive in Italy.

Actually, when we started to see actual menus, we figured out that vegetables are mostly listed as side dishes.

End of side note. Back to the walk. Fancier houses leaving town–perhaps the wealthy live closer to Rome? Although we were in the suburbs now, there were still lots of fields. We saw our first shepherd with his flock of sheep (lo and behold, these were wearing the cow bells!) and several working dogs. 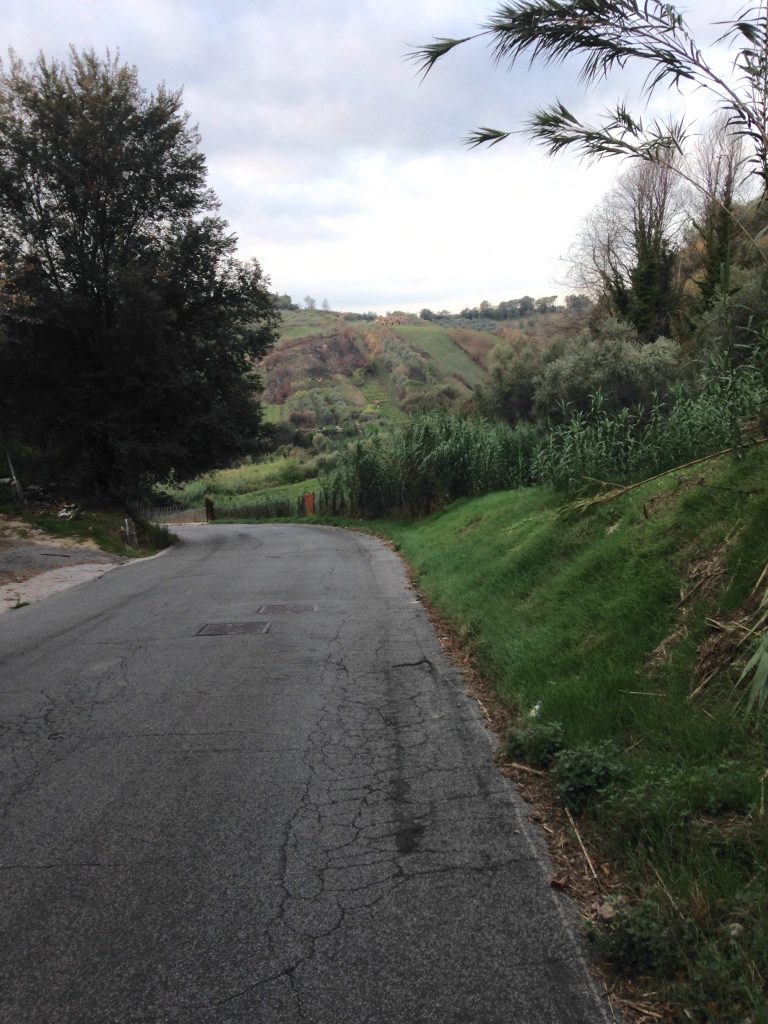 A lovely descent out of town. 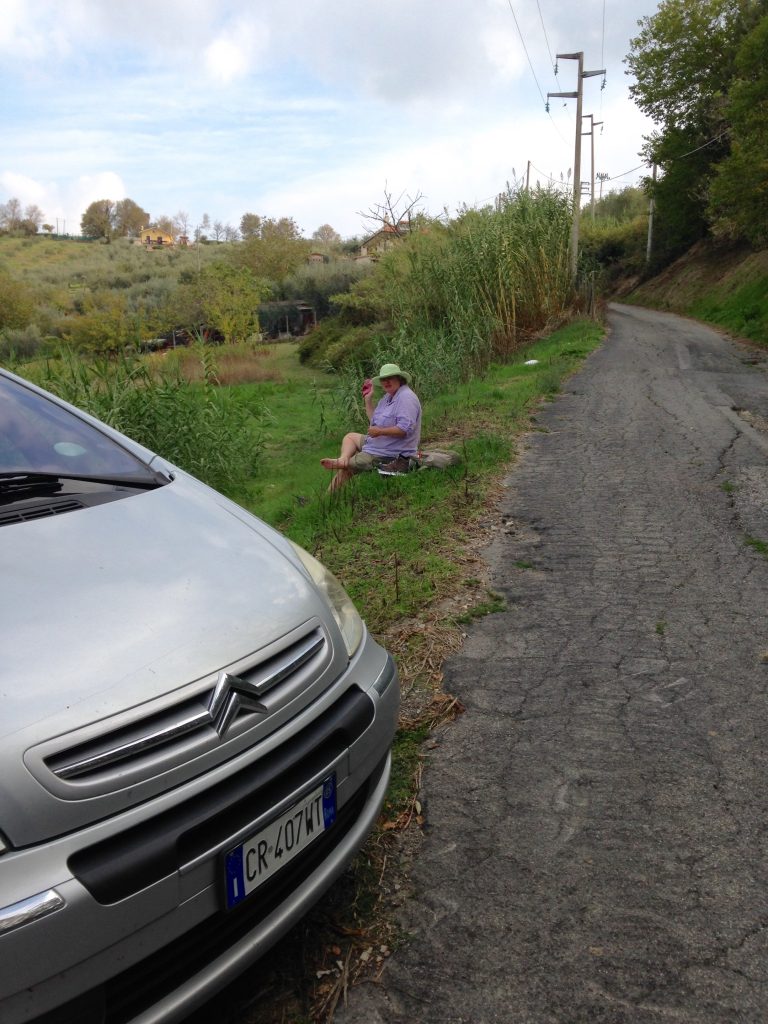 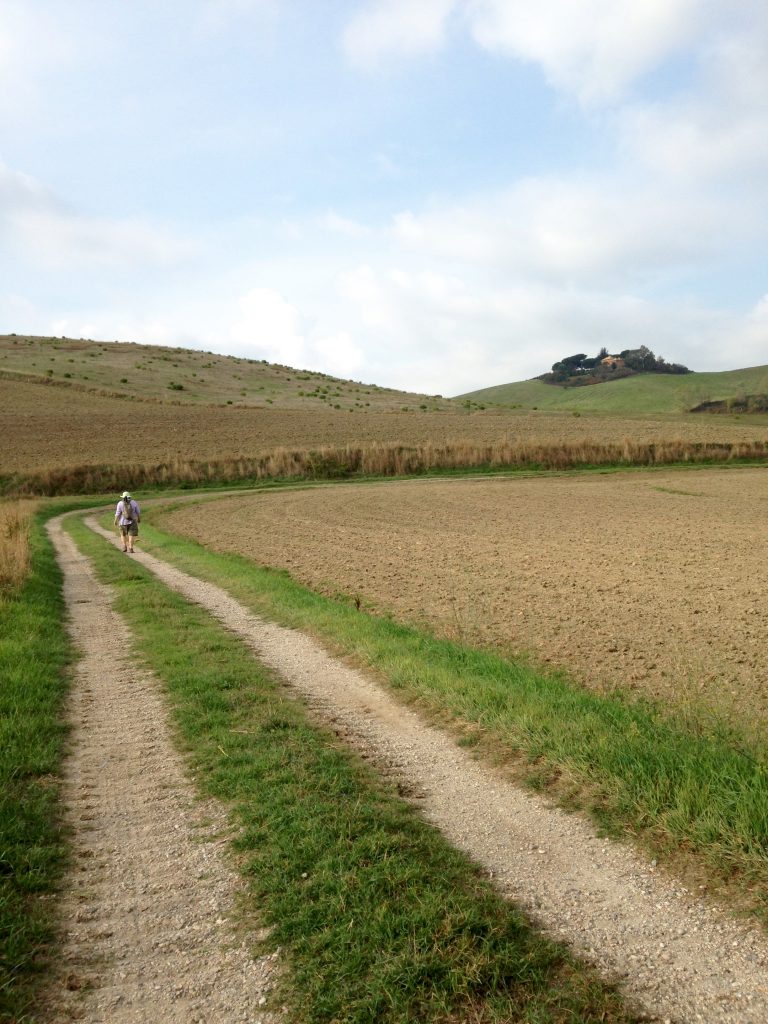 We walked along a tractor path for a bit. At one point the farmer had plowed our path up, and we had to guess/ have faith we were heading the right way.

It was lovely and easy, though we were both getting progressively more tired–simply the accumulation of days I think. Well, also it was 12 miles, maybe a bit more.

And then, on part of the trail that led through a nature reserve,  we were befriended by two dogs who leaned into us and jumped up in a friendly way and made us go all soft inside. We got concerned as they followed us for a good mile, but they eventually let us continue without them. 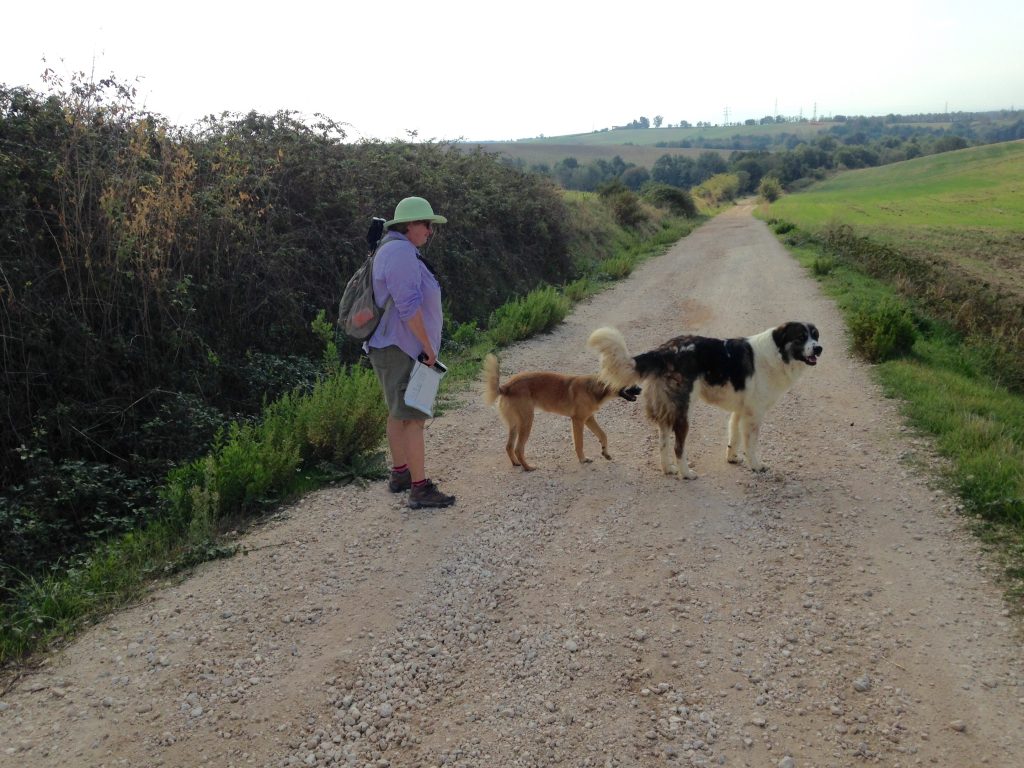 These dogs LOVED us!

At some point during our walk, the via di Francesco signs disappeared. Since we were going almost entirely straight, we weren’t worried, but felt a bit abandoned.

Also, more people! It was Saturday and many were out on bicycles or hiking/walking. We saw another couple with backpacks and poles, but they did not seem eager to tarry and talk, but perhaps other pilgrims!

This lovely mosaic shrine greeted us as  we climbed ( of course) the slope up to Monte Sacro, very much a suburb of the Eternal City and our resting place for the night before we finish. 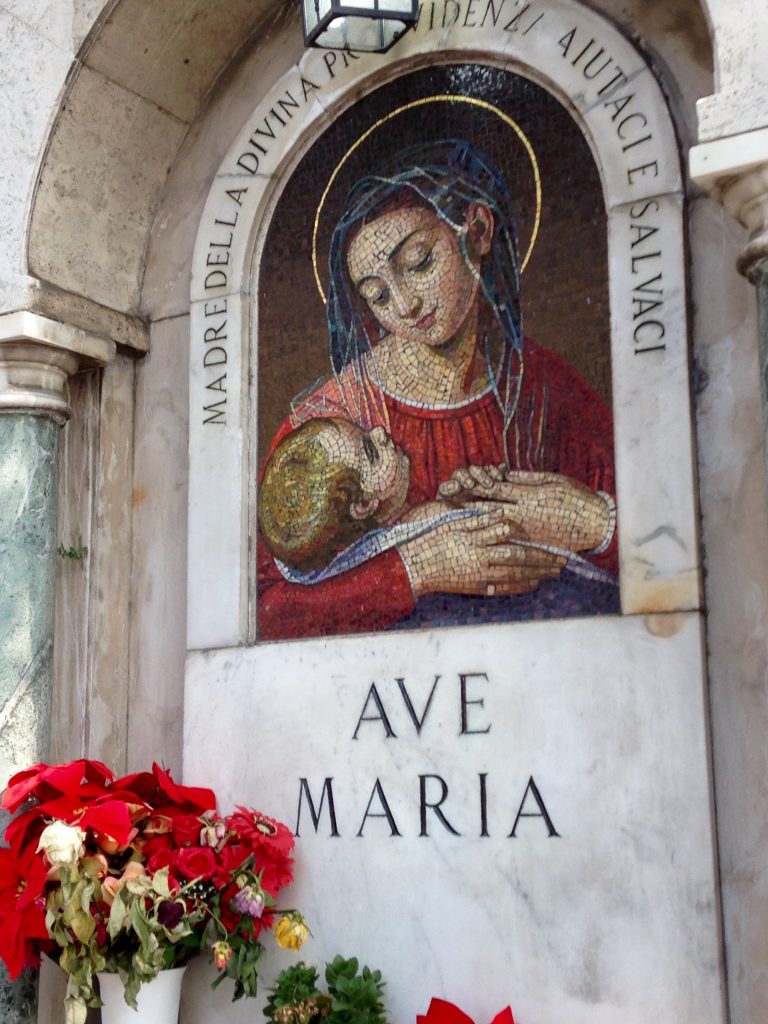 On our way into Monte Sacro, this lovely shrine, a mozaic 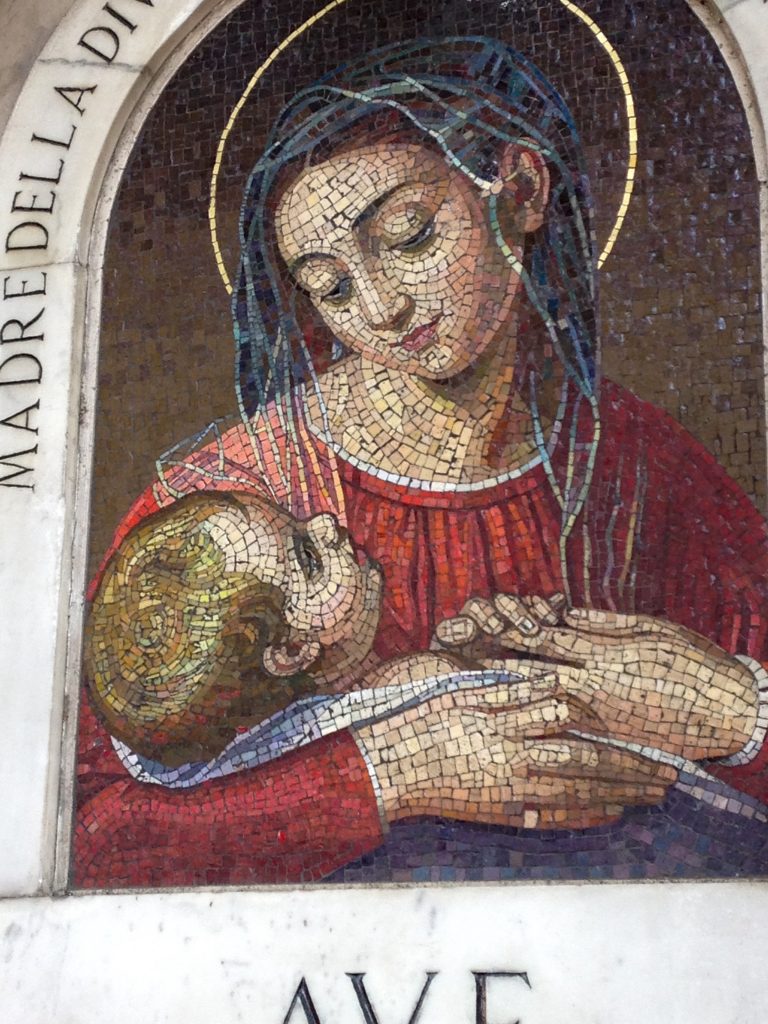 This entry was posted in Personal, Travel and tagged Italy, Via di Francesco. Bookmark the permalink.