Walking into Rome and the Vatican City

Last day of our trek on Via Francegena di San Francesco. (I finally checked one of my photos of the signs we’ve been following to get the name right, so take due note.)

We were tired after 5 days of hard walking/hiking, but so excited too–our final miles. The directions had us following a bike path for much of the way. Its being Sunday, we saw lots of people–bikers, walkers, runners. Such a shift from previous days! And for the first time we walked exclusively on pavement. 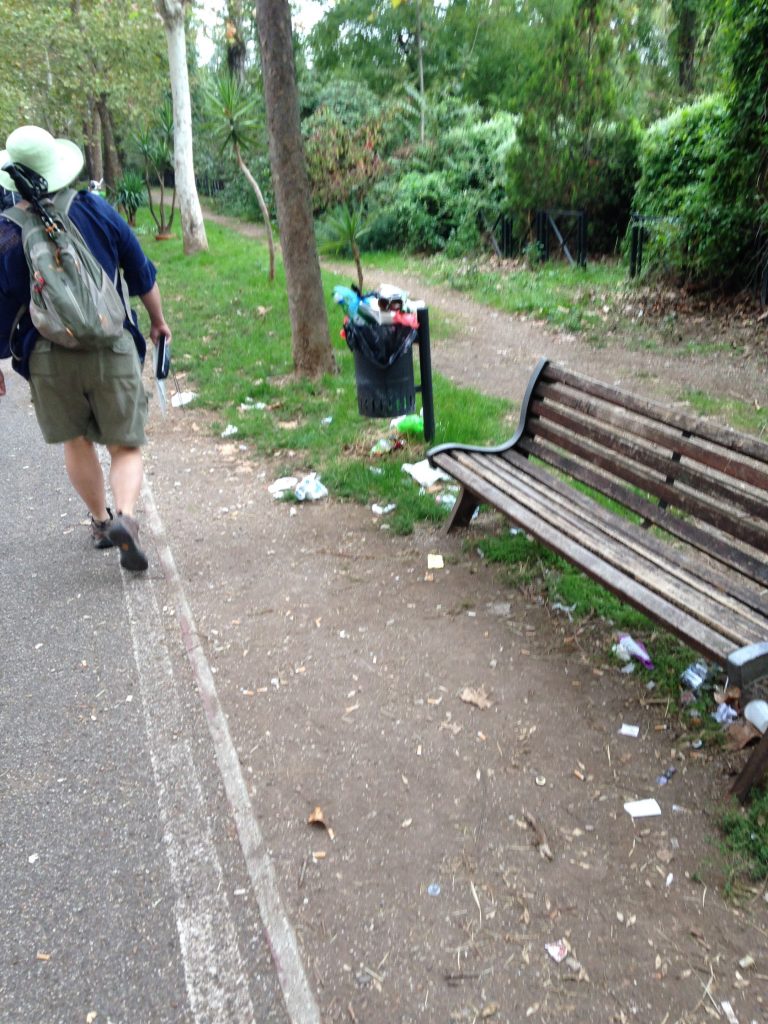 The famed garbage problem of Rome. Ironically, this was not an issue so much in the city, but definitely in its outskirts. All bins overflowed, litter everywhere.

I adored my hiking poles, but one of the running gags of our trip was my trying to get the rubber tips to work for me on pavement. They wore out very quickly–probably due to my putting my entire (not insubstantial) weight on them as I got more and more tired. This meant that the pointy part that is so good on rough terrain, skidded and clinked on pavement. I tried stuffing earplugs in the holes in the rubber tips, and that worked for a while, though the tips kept falling off. Imagine the slapstick: put on, fall off, roll some distance (or bounce). Bend down, pick up. Repeat. And repeat. Then I tried pieces of wood that I chiseled down with Annie’s handy army knife. But this last day I gave up, finally stuffed the pathetic rubber tips in a pocket, and tapped my way down the bike path, sidewalks, and streets we walked down.

Easy walking! Virtually no hills and only 9 miles that day–maybe even less! But we were tired. I needed my poles. 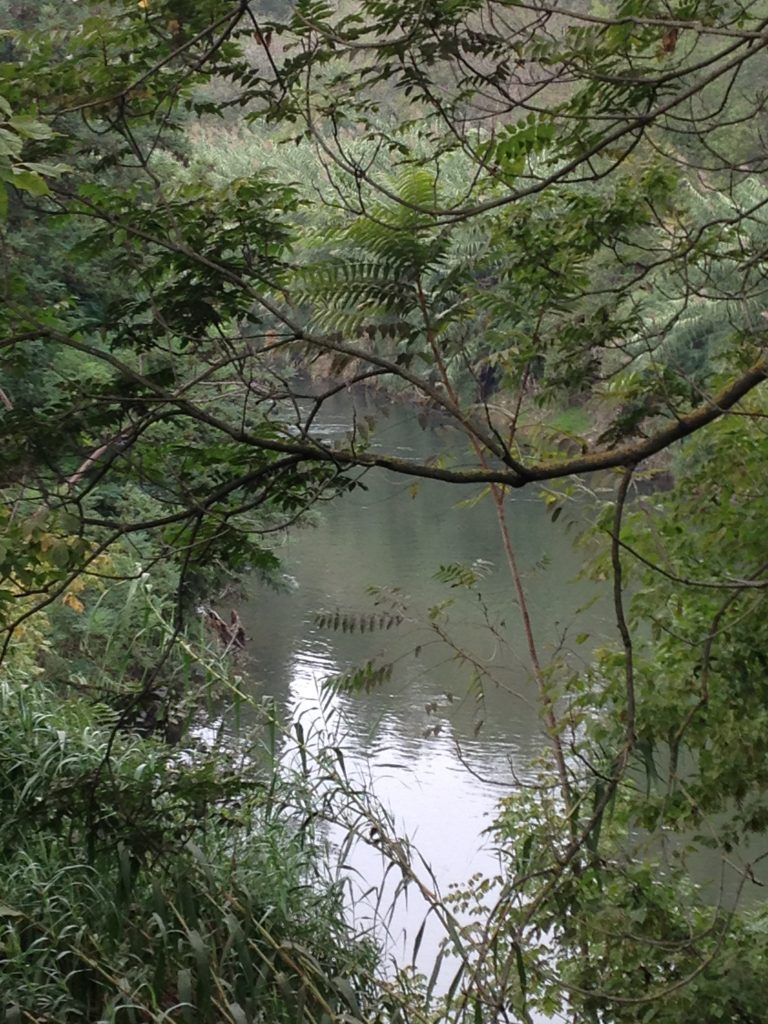 We walked along the Aniene River for quite a while –which joins the more famous Tiber (or Tevere in Italian). Much of the time we couldn’t see the water, but we caught occasional glorious glimpses.

We parted from the river, but still went mainly along the “pink” bike path, deviating here and there as the directions indicated. We still saw the occasional sign for our pilgrimage trek but they were sadly quite rare and eventually disappeared entirely. Annie, who was in charge of the directions given to us by our tour group, Hidden Italy, usually led the way and instructed me frequently with various snippets of information. Like, the Rome Mosque is the largest mosque outside the “Arab World” (which includes Russia for some reason). Evidently there was quite a bit of a kerfuffle at its construction, resolved when they lowered the minaret to be shorter than St. Peter’s Basilica. 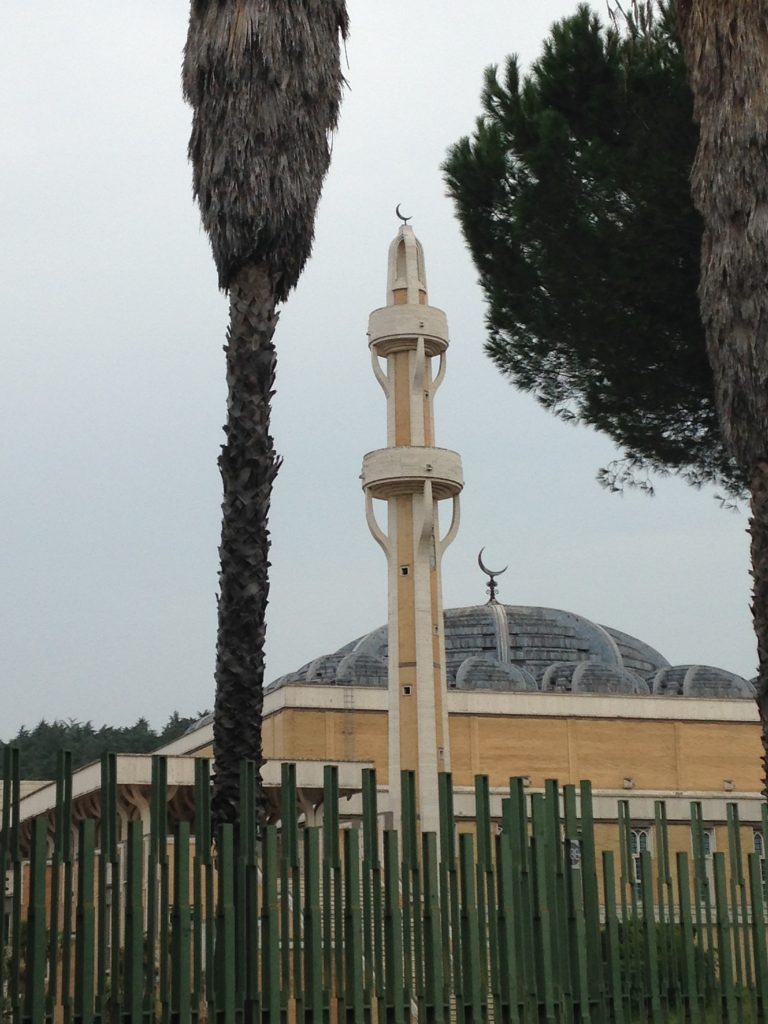 We were guided PAST a couple of parks, tantalizingly kept from our view by high walls, and annoyingly packed with parked cars that made walking that way difficult. But there were several fun sights on the way. 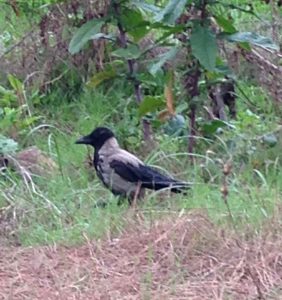 The oddest bird –a crow in fancy dress? We saw them several times. 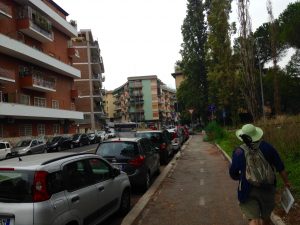 All the streets were lined with cars parked very tightly. Impressive parking skills, for sure, but it could be difficult to maneuver around when the sidewalk or bike path disappeared (which it did periodically). 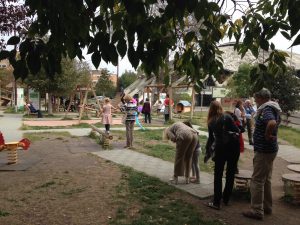 A playground, very heavily used, and banked by intriguing architectural/sculptural…things.

But finally we crossed the river–by that time maybe it was the Tiber!– and entered Rome itself. After a delightful surprise of an enormous Sunday flea market, 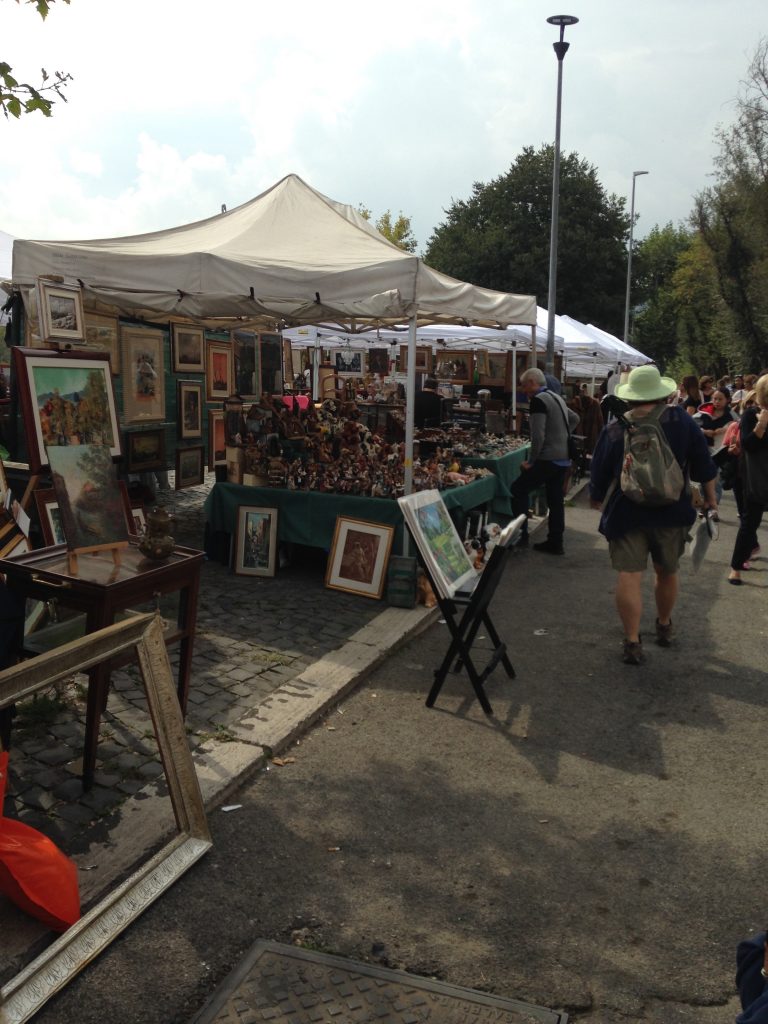 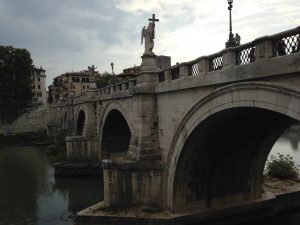 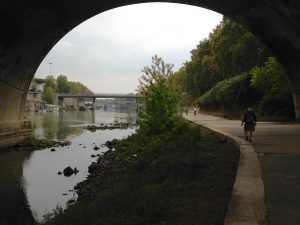 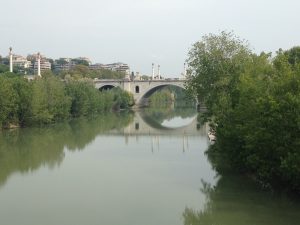 Many, many, bridges–these are just some. Finally we saw it in the distance: St. Peter’s Basilica. 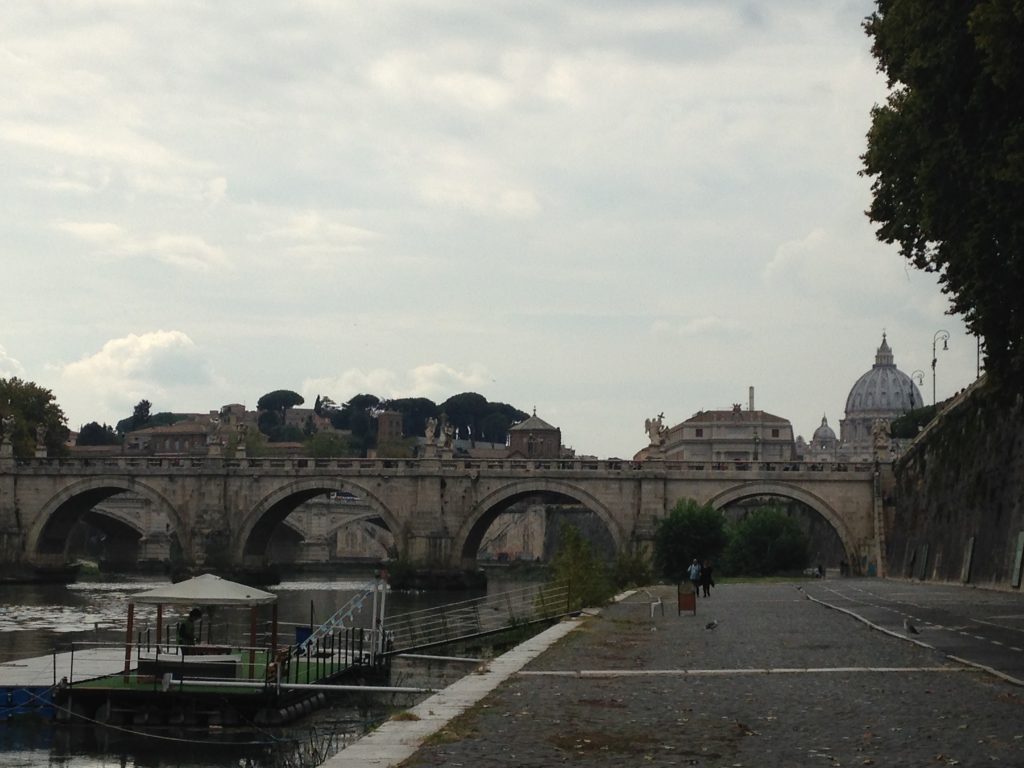 That’s it. We were almost there! 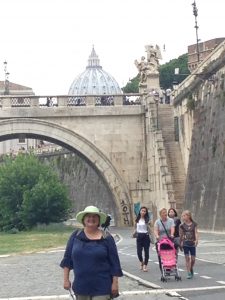 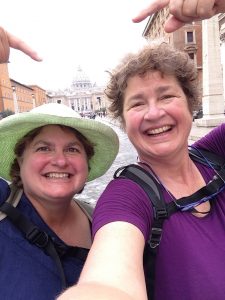 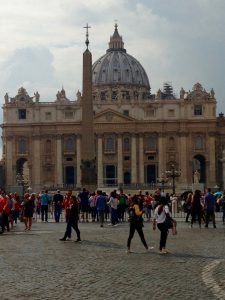 And there it is. Complete with the obelisk under which St. Peter himself is said to be buried.

What a fantastic feeling to enter the ancient, eternal city of Rome under our own steam and after several days trekking through the various paths of Lazio to get there. After some confusion to the Rome way of numbering (they address opposite sides of the street differently), we found our hotel for the night, the gorgeous Hotel Santa Anna only a couple of blocks away.

The best part of the room? The most amazing shower either of us had ever experienced. 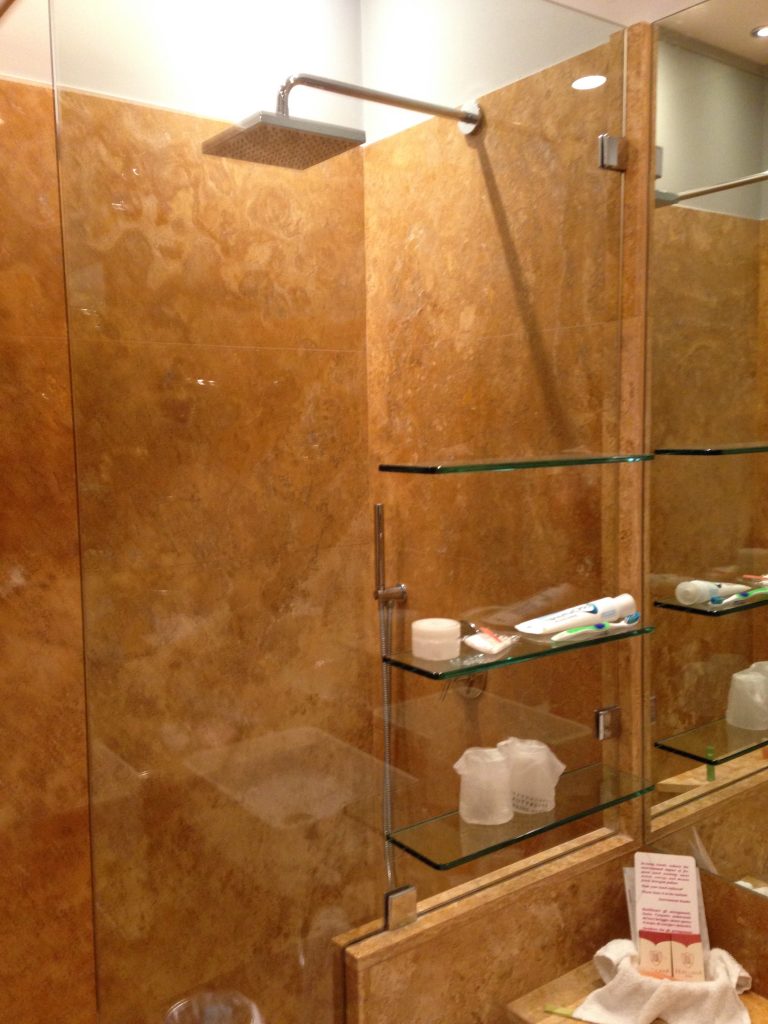 This entry was posted in Personal, Travel and tagged hiking in Italy, Via Francegena di San Francesco. Bookmark the permalink.