Maybe this is true everywhere these days, but it has surprised me in my sweet town of Bellingham, WA that there are people who are using their homes as platforms for political statement/insult.

One such home, just down the street from me, offends me so much I don’t like to walk near it. 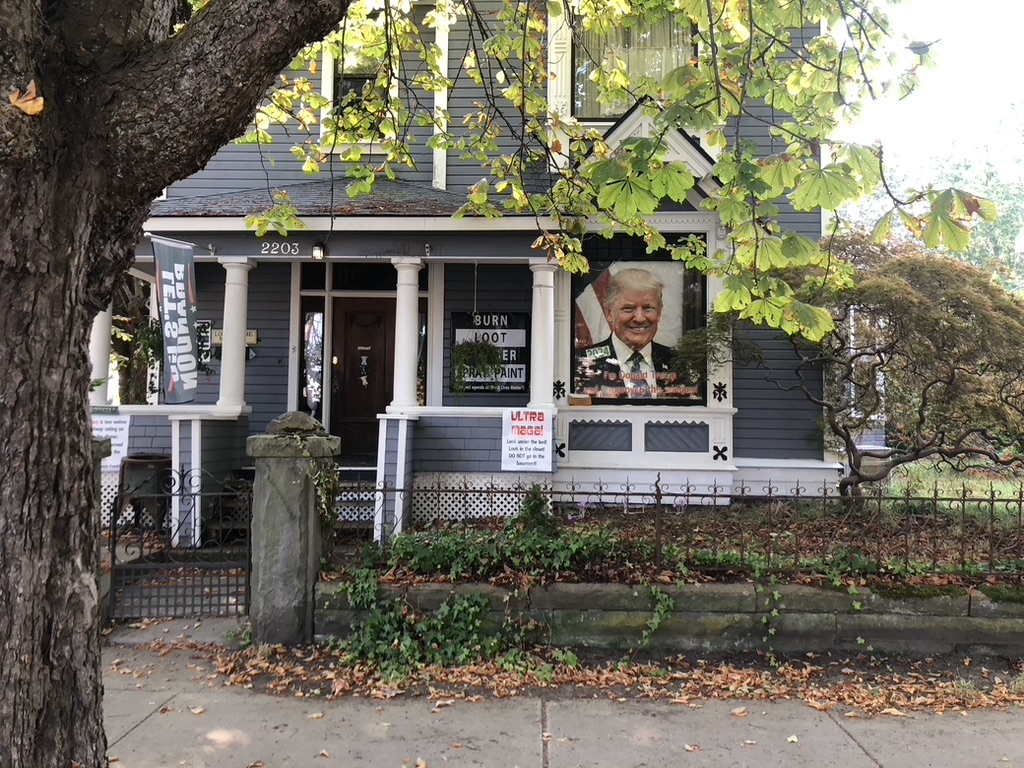 But just like I tend to push at a bruise to see if it still hurts, I do walk by to check out what this man has added lately to the sides of his house. 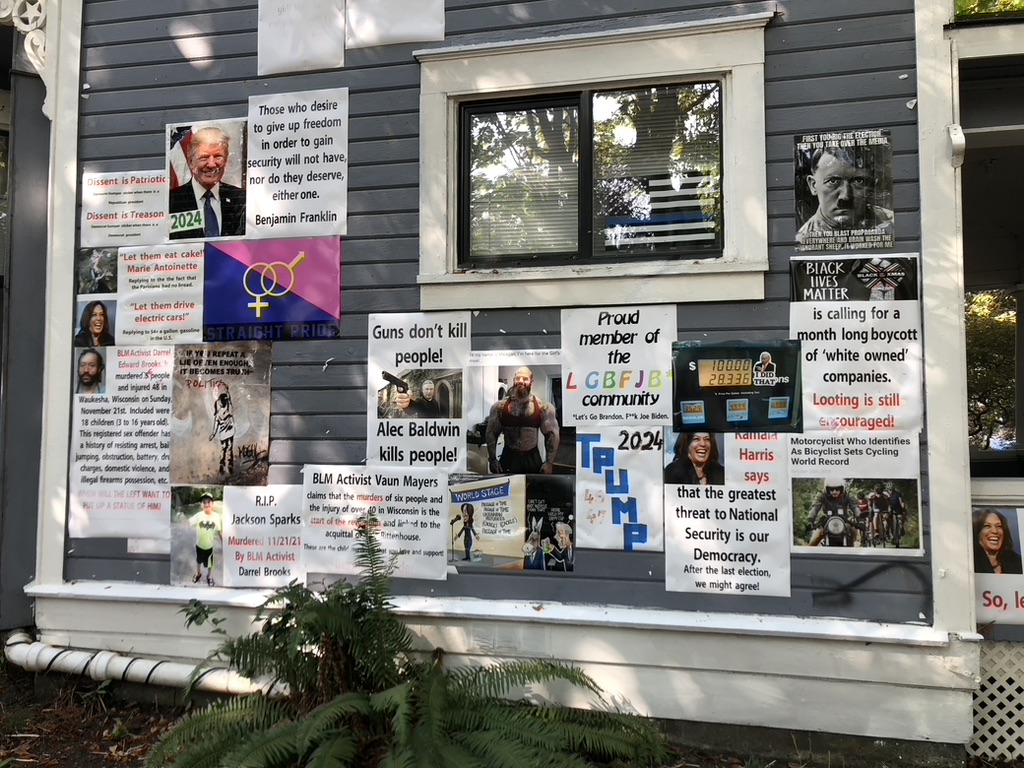 Why would someone do this to their house? To their neighbors? Because it is SO in the face of the Black Lives Matter signs and Gay Pride flags we have adorning other homes nearby. I sense he has a need to offend in order to feel like his perspective shows up. His house is quite large–an enormous canvas for his “screw everything you believe in and hold dear and important!” message. At least he seems to have limited himself now to only one sign that reads “Joe and the Ho Gotta Go!” He must have taken down the 5 or 6 replicas to make more room for other “ultra MAGA” messages. 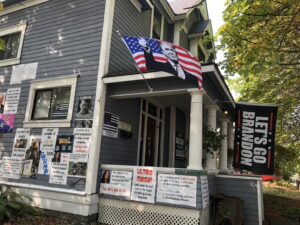 But if I walk in another direction, I see a house that has a very different, but no less in-your-face message. 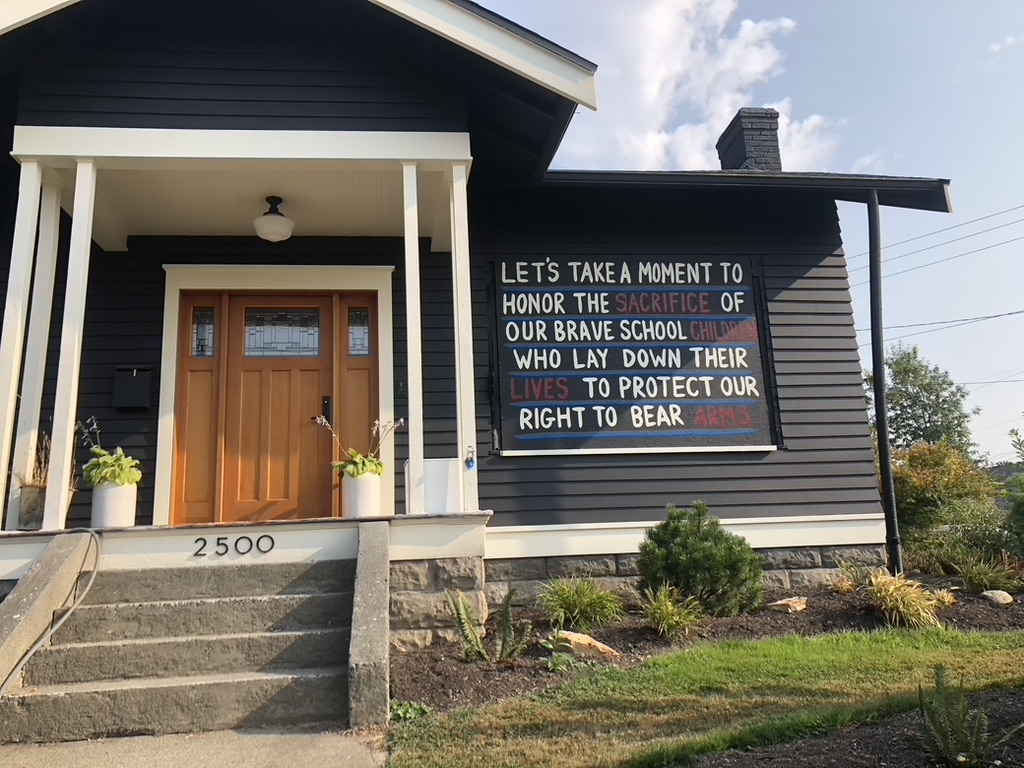 This house’s message hits my gut in a different way. While I think the Trump House is an unpleasant reminder of how some people live in a hate-filled alternative reality from mine, this home reminds me with brutal honesty of a reality I believe exists. Of course it hurts my heart to remember the children lost to crazies with guns. It’s supposed to hurt.

People have had signs in windows and on their lawns for as long as I can remember. Some are political; many are issue-based. I had not realized before that our very houses themselves can advertise our beliefs and politics.

I, too, have shared who I am with my decorating choices. My house is a bright green green with bright blue doors– a choice so loud my husband calls it cartoonish. Perhaps it pains people with more delicate tastes to look at it. 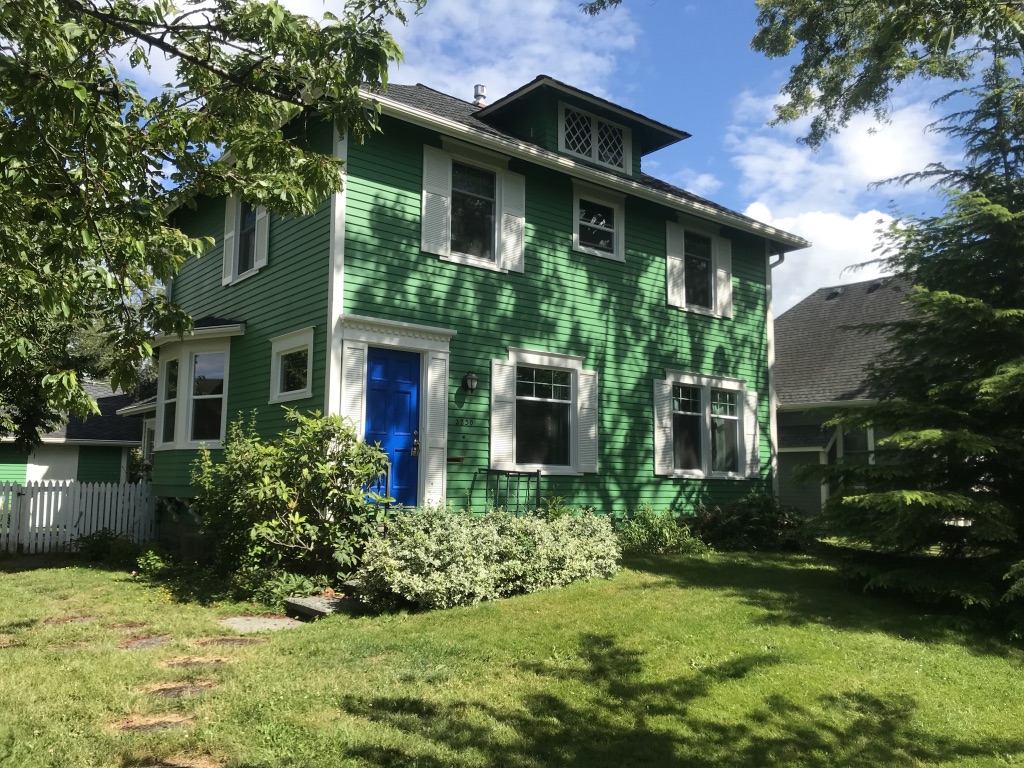 My car is yet another canvas for me. 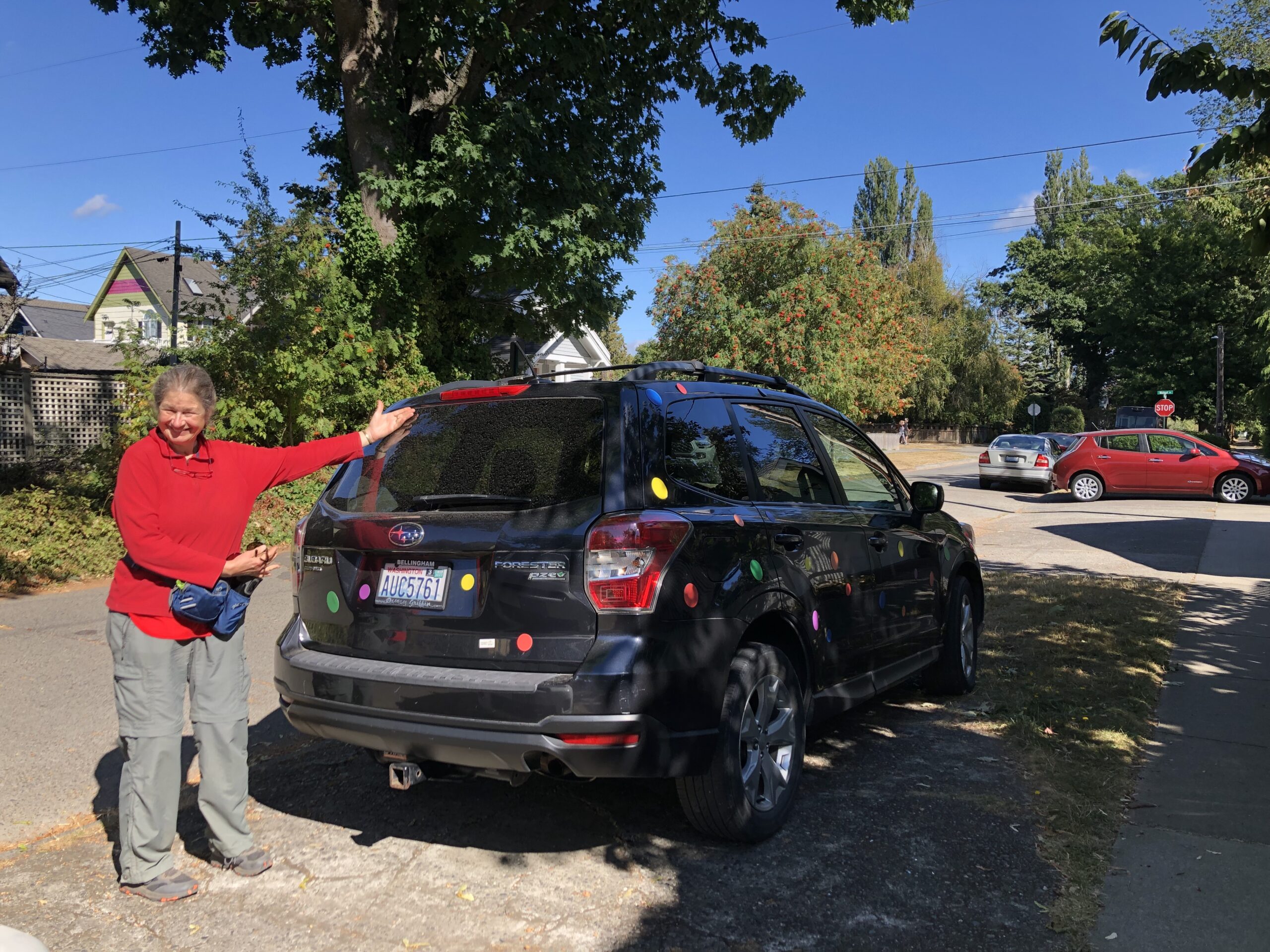 My neighborhood obviously doesn’t have zoning laws or restrictions against distinctive colors or signage on private property. I know that in gated communities there are often many regulations. In my beloved Chautauqua, NY, for instance, you are not even allowed to post a “For Sale” sign during the summer season. Too much of an eye-sore. When my family put up a “Black Lives Matter” sign, we got flack for it.

So freedom of expression is not always guaranteed in our “free” world, despite the first amendment to our constitution.

Part of me wants to be protected from tastes that clash with mine. It’s easier. Tidier. It feels better, creates a pillow of comfort around my psyche. Like-minded people make me feel like I fit in. My tribe. My peeps. In such a world no signs are needed,  right?

And a part of me thinks talking too loudly (printing too boldly, coloring too wildly) is just crude. I hear a voice in my head: “You were raised better than that.” That is the shushing voice of a woman in gloves and a hat that matches her shoes. The message tells me to ignore my passionate beliefs and let them simmer inside or, for heaven’s sake if I care that much, write a letter to the editor or to congress. No one else wants to hear about it. Or see it.

Of  course now we have twitter and facebook and heaven knows what all to use as a vent for diatribes. I date myself so easily when I forget that letters and newspapers are part of a more tasteful past. I REALLY find the diatribes on social media I read about (in news articles mainly) tasteless and scarily omnipresent. I hate rants. Rants are really fun and freeing for the person doing them, but tedious and distressing for those who have to hear them. Good heavens. I AM my  grandmother!

And yet. And yet. Keeping things comfortable is not right. Zoning and banning, protecting the sensitive, whatever name you want to call it when people are silenced and not allowed to speak their piece or express themselves –that all makes me extremely uncomfortable. Who gets to decide what is acceptable? Who gets to speak? It always seems to be the people in power, whether an elected group or self-appointed, who make those decisions. And those in power want to appease others with power. In our divisive current culture, there’s a lot of silencing going on, a lot of judgment and not listening to anyone else–which is the same thing, isn’t it?–as silencing someone. Both sides embrace a cancel culture of those who offend. Both shout so loudly they drown out any argument.

We all (and maybe this is me channeling my activist mother) have a duty to express ourselves. To speak up and confirm what makes us who we are. But we also have a duty to look at, listen to and take in who others are. To acknowledge them as just as validly human as we are. So, even though these houses make me uncomfortable, part of me really admires the courage it takes to broadcast so loudly what you stand for.

Hafiz says “And God said “I am made whole by your  life. Every soul completes me.” We have a Threshold song that chants that. The owner of Trump House challenges me to open my mind and my heart (harder!) to the broad spectrum of humanity.

It’s one way for me to honor diversity.

This entry was posted in Personal. Bookmark the permalink.