In my last post I referred to a family event that sent my trust muscles into spasms. From a distance of  several months now, it’s hard to remember just how challenging a time that was for me, let alone for my beloved husband who suddenly lost the use of both his legs through an accident at work.

But I want to remember. People go through terror in their personal lives all the time: a scary prognosis, a loved one’s accident, a war, a wildfire, a shot fired. Sometimes it’s just a moment of fear, but when the stress continues, how do they find the courage and stamina to keep going in the face an unknown future? Where do they find the resources? I think of the uncertainty of those living in Ukraine and other war-torn countries right now, of the millions in refugee camps around the world, of those who don’t have a home at all. When they are not actively struggling/working to survive, how do they bear the stress?

You have to have faith in something. Trust in something. It can be in God or in people or in luck. Or maybe it’s in yourself. You know you have do it, so you do. And maybe, if there is another side you can come out of, you are stronger, more resilient, because of the challenges you lived through.

Sometime you can get a sign that helps you see the light. That literally happened to me  during the months of Andy’s  recovery. A friend’s mother had just passed away and my friend called me to come sing. An honor from any perspective, but as others gathered around her, my friend shared what the huge sign on her mother’s wall meant:

Early in her parent’s marriage they had heard a song in a musical that resonated through their lives together:”Everything’s Gonna Be Okay.” EGBOK. (I’ve tried to find the musical, but haven’t had success). Coming into that room at that time–I so needed reminding that yeah, everything’s gonna be ok! It felt like the biggest gift.

Trusting it’s going to be okay takes conscious effort. We will make it through. We’re gonna be okay. We got this. That was my mantra to Andy and myself this past spring.

I sent this to my greater family in early March of this year:

Andy had a fall at work while trying to manipulate his body around a kid who was running down the hall. We think Andy’s legs twisted together, the kid ran into him, and Andy fell badly, tearing the quad tendons on both legs. This happened February 9. It took a while to realize this was not just strained or pulled muscles and to get him into the ortho surgeon. He can’t walk. We now know the implications of the saying, “doesn’t have a leg to stand on”! (Luckily we can both still laugh). Alas there have been other delays for surgery, but we’re hoping he’ll get in very soon and can start the healing process. The pain is WAY down, Andy’s  spirits are amazingly strong, and his ingenuity inspires me as he figures out ways to maintain his independence. He has great arm muscles and scoots around our stair-heavy home on his rear end, dragging his legs. It’s scary and challenging to have this shift in our lives, but we feel quite blessed that he will heal given time (and a fair amount of recovery pain after surgery).

When it first happened, Andy really needed me. I became chief care-giver and chief advocate, though our son who lives nearby was a godsend. We three became a team brainstorming solutions to challenges, and that felt wonderful. Andy never stopped working (that he could do so virtually was another godsend. He needed the distraction in a big way!), so it was up to me to handle practical realities to cope with the future needs and issues to help him recover, much of which were unclear and uncertain.

We didn’t know when surgery would happen to reconnect his tendons back to his knees, though it needed to be pronto. Each delay (there were two) made the surgery harder. Tendons recede up the leg when not attached, and it becomes a greater challenge to stretch them out to make the suturing into the kneecap work.

We didn’t know what post-surgery recovery would look like. Having both tendons tear at  once is rare,  and yet Andy, only 61, was in terrific shape. He’s also 6’3″, with proportionately long legs. In other words, no one was willing to go on the record to predict what his recovery would like.

It’s a killer living with the unknown.

We knew he’d be in braces to hold his legs rigidly straight so the tendons could grow into the kneecaps. He wouldn’t be able to go up and down stairs, not like he could do before surgery (During the five weeks between the accident and his surgery, he actually had a lot of freedom: “You can’t hurt them worse”). Having him recover in our house was not an option.

We knew this because we tested ideas out ahead of time — 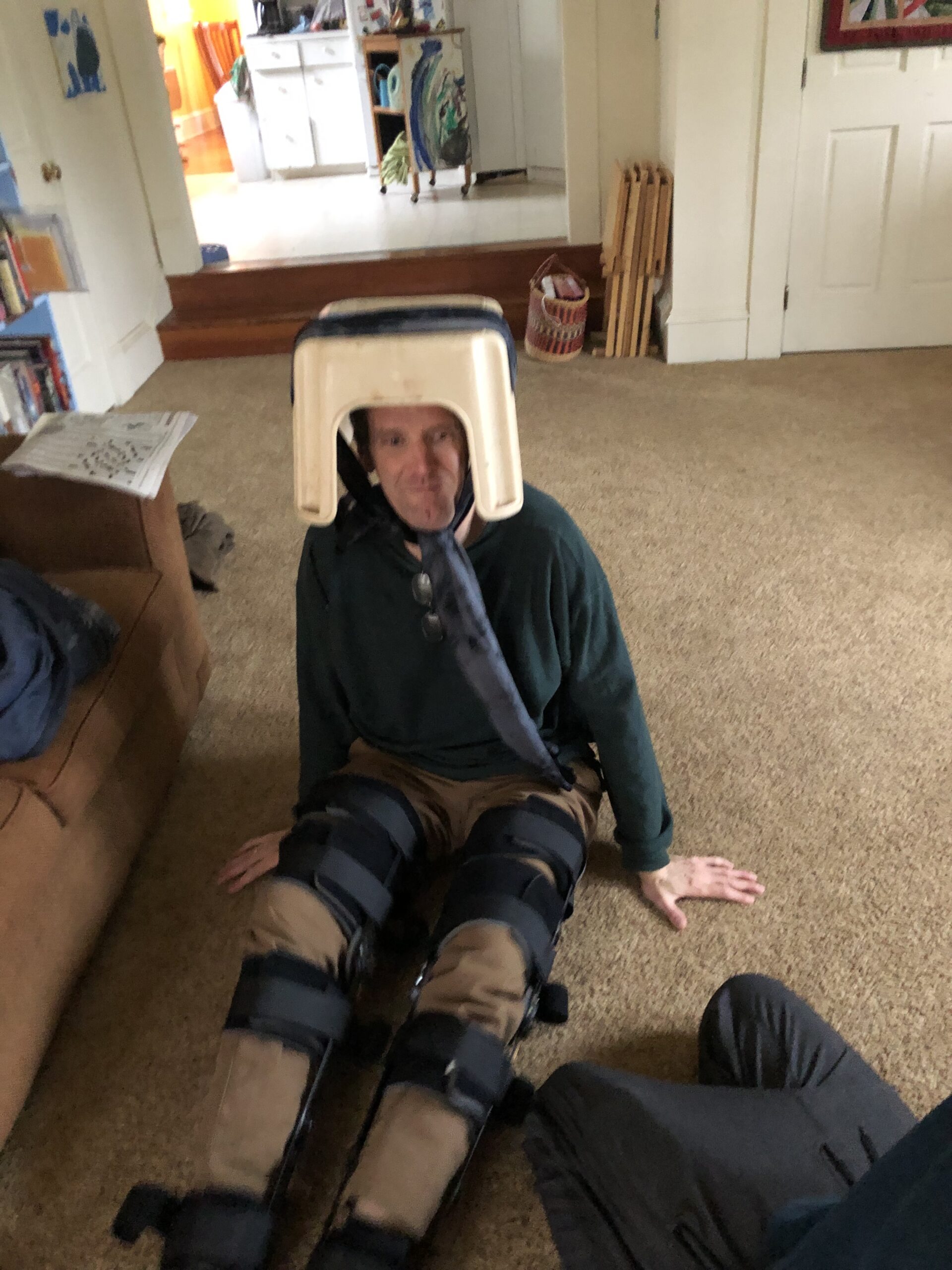 What a sport! Before surgery, Andy tried out what it would be like to have the braces on and still navigate our house with some  independence. (We ended up buying another stool to keep  upstairs)

Would he be sent to Rehab after surgery? Should he be? He so didn’t want that, and I didn’t blame him, but I didn’t know how much care I’d need to provide. Would I be up to the task? It was so scary not to know.

But EGBOK indeed. Things started to fall into place:

A friend said that they were going off on vacation anyway, that leaving a bit early would be a splendid idea, and we could rent their one-story home for 4-6 weeks. They’d designed the house to age in, and how lucky for them we could test it out. Both the rent  and these assurances assuaged Andy’s Yankee guilt enough to impose on them. Before they left, they took doors off hinges so we could get a wheelchair in there, moved furniture, explained how their king-size, remote controllable bed worked. The relief to have this in place! I can still feel it.

The L&I claim was finally opened. That alone took four weeks, due to some miscommunication with the original ER doctor. But it meant that Andy’s medical bills would all be covered, and that stress issue lifted.

The surgeon Andy had was fantastic and the operations went well, despite the delay making it quite a challenge to reconnect one of those tendons. The delay worked in one way for me: surgery happened in a COVID window where I was allowed to visit! Andy stayed there two nights, something a single-leg accident would not have needed. Much to my relief, the hospital wouldn’t release him until he could stand and use the walker and get in and out of the wheelchair, which did come in time! Not only that, a social worker arranged for Andy to be delivered to our new home, for PT and  OT to visit him there (no need to transport). We were going to make it!

From then on, problem-solving became almost fun: The transportation issue was huge: how to get a tall stiff-legged man into the car. We could not make him fit into the front seat, let alone navigate the angles for a safe ride! The Ultimately, I drove with him sitting sideways in the back seat. Once again,  his strong tricep muscles came in very handy. Very quickly he gave up on his uncomfortable ramrod wheelchair setup and relied entirely on his walker. 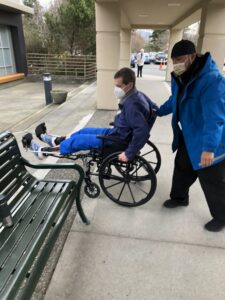 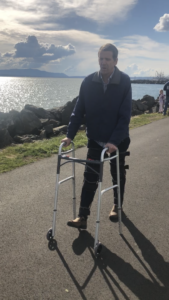 By mid April (4 weeks out), Andy  had convinced the PT and OT that he could navigate the stairs in our home–even stiff-legged! And by the end of that month  (6 weeks out), the surgeon allowed the slow process of stretching the tendons to begin. It wasn’t even that slow! Because Andy was religious about doing his exercises, each week he could flex at least 15 degrees more: another notch of freedom on those braces! By the end of June, Andy got to take them off. 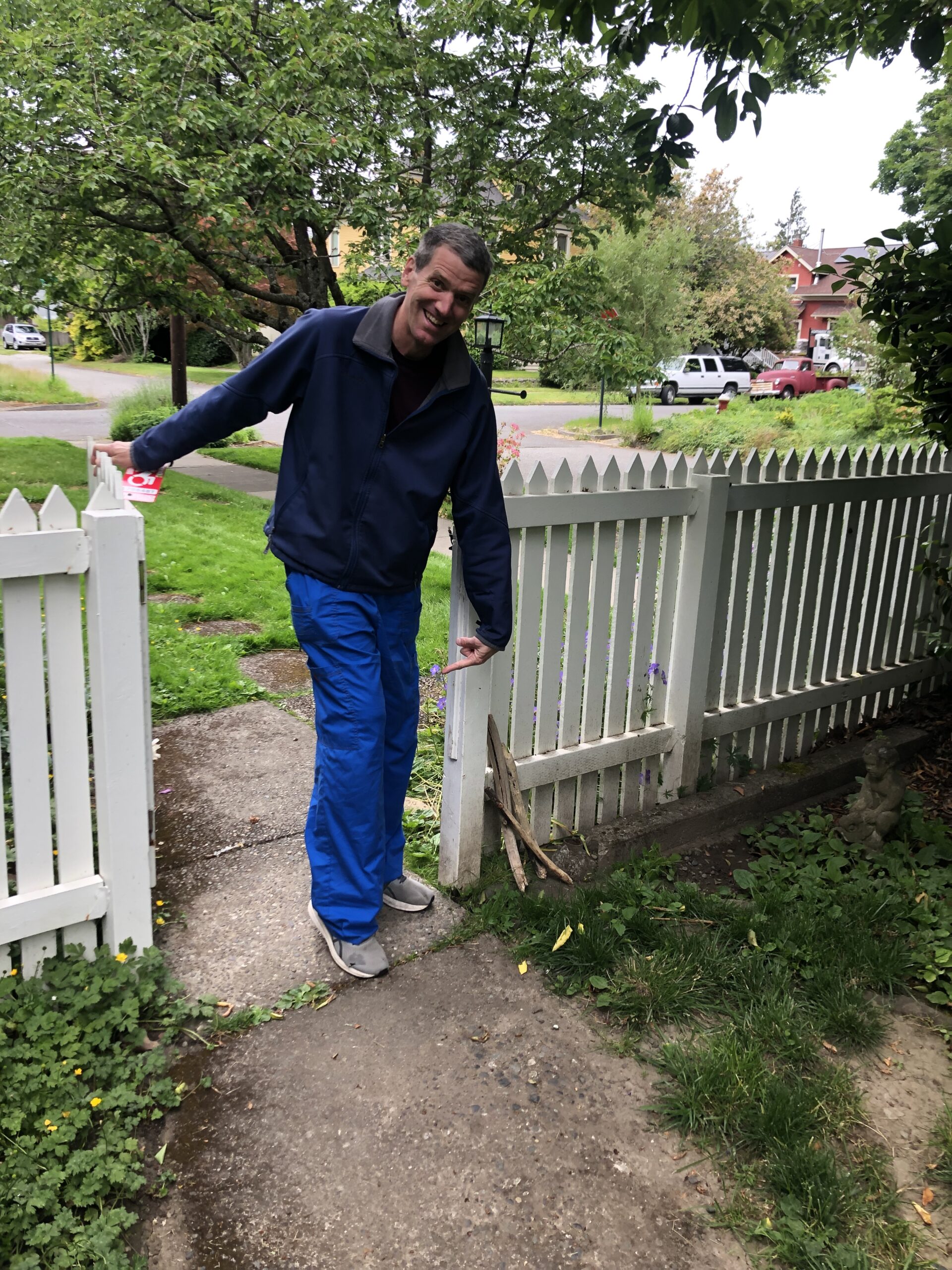 Note he has the handicapped parking in his hand ready to throw in the garbage!

I know it’s still scary for Andy. He still doesn’t  know for sure how much of his past life is gone  forever. Will he ever ski moguls again? Will he bounce down mountain trails on his bike? And he may not. He was told that perfect recovery would still just be 80% of his prior capabilities so there’s a lot of grief there. But he’s a very stubborn and determined  man, and if anyone can get back to a 24  year-old body after a major injury at 61,  it’s him.

As for me, this was a very challenging five months, but it left me feeling more secure than ever in my relationship with my husband. The future is always uncertain. Freak accidents occur. We may all be going to hell in a hand  basket, but we will make it through. We’re gonna be okay. We got this.

A final gift for you: “Light of a Clear Blue  Morning” by Dolly Parton, arranged by Craig Hella Johnson (with the Coker Singers).

This entry was posted in Personal, writing and tagged bravery, fear, hope, trust. Bookmark the permalink.