Still a work in progress, this self-portrait will appear on stage to ilustrate my character ("Big Suzie")'s desire for self-aggrandizement. What a kick to work on this with the help of my art teacher!

I’m in a play. It’s been two years since I’ve been on stage and way longer than that since I’ve had a part that’s demanded I be real. So this is a challenge for me. A big fat pretending challenge.

And I bring it up because no matter how much acting isn’t writing, it sure uses a lot of the same muscles.  The pretending muscle is a big one.  When I act, my goal is to put myself into the skin of someone else and make it real.

So I’m going to fess up to why I find this so hard: sometimes I don’t know what real is.  I don’t even know who the real ME is! And I’m 52. You’d think I’d have this figured out by now.

Sometimes I think it’s all real. All true. Whatever is, is right. Somebody famous said something like that*.  But we fake our responses all the time. You know phony people. So do I. It’s a social skill, for heaven’s sake! And it can get so habitual that maybe we don’t even know when we’re being honest and when we’re “putting it on.” We can trick ourselves. So can characters.

How old was I when I first realized that not everyone thought or felt the way they pretended to? 9? Younger? Such a betrayal! Such an awakening to the dark side of human nature.

And such, such, such giddy potential for drama and comedy – conflict and farce and morals and romance. All stemming from pretending to be something other than what we are. Than who we are.

So here’s a writing challenge: what kind of pretending do your characters do? And do they know they are pretending? Why are they pretending – what do they get out it? Does the pretense need to be exposed? (usually this exposure brings about an ending!)

Here’s a famous example: Lots of pretense in Hansel and Gretel. 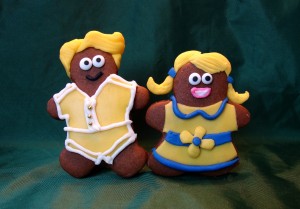 In this story, every single bit of pretense works to serve its purpose. And once its purpose has been achieved, the pretense is exposed. The children learn quickly that in order to survive, they need to emulate the adults. What a moral!

For less famous (but hey, written by me) examples of how pretending impacts a scene, click here.

*I just googled it — Alexander Pope, “Essay on Man.” He said exactly that. Gosh, I knew I was educated!

This entry was posted in Personal, writing and tagged acting, story, writing. Bookmark the permalink.