We managed to find our way back to the trail fairly easily, and started our trek in good spirits, heading out of the town of Poggio San Moiano in a much quainter downhill fashion than we arrived, including passing by several murals. The light was perfect for shadow pictures also! 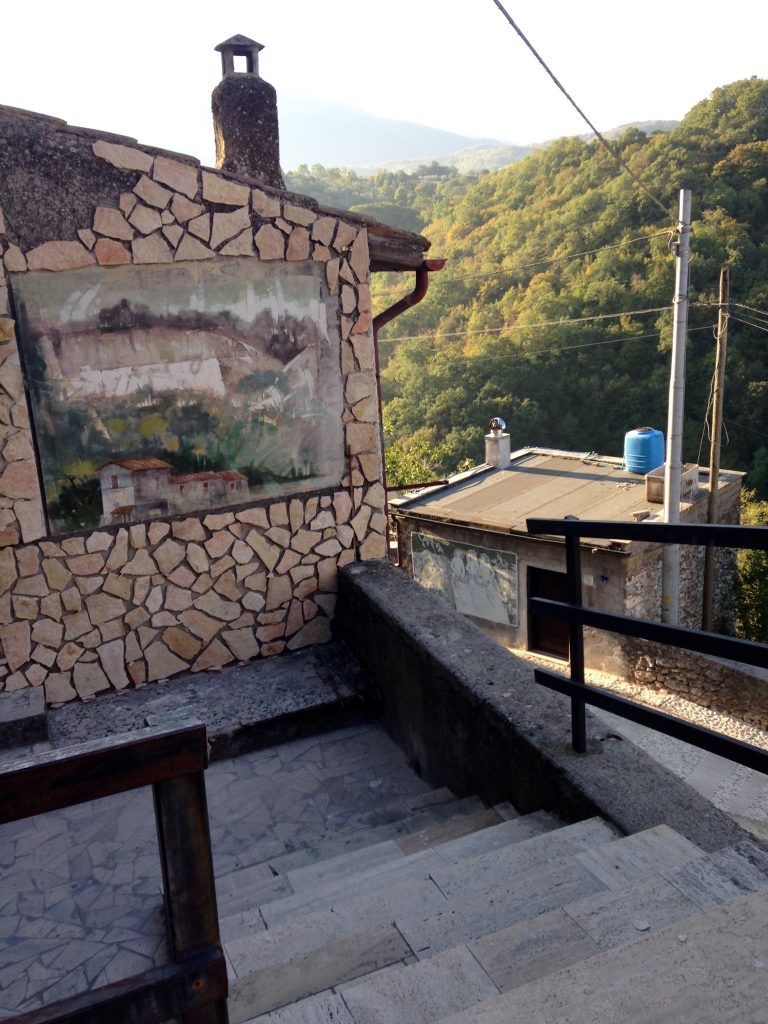 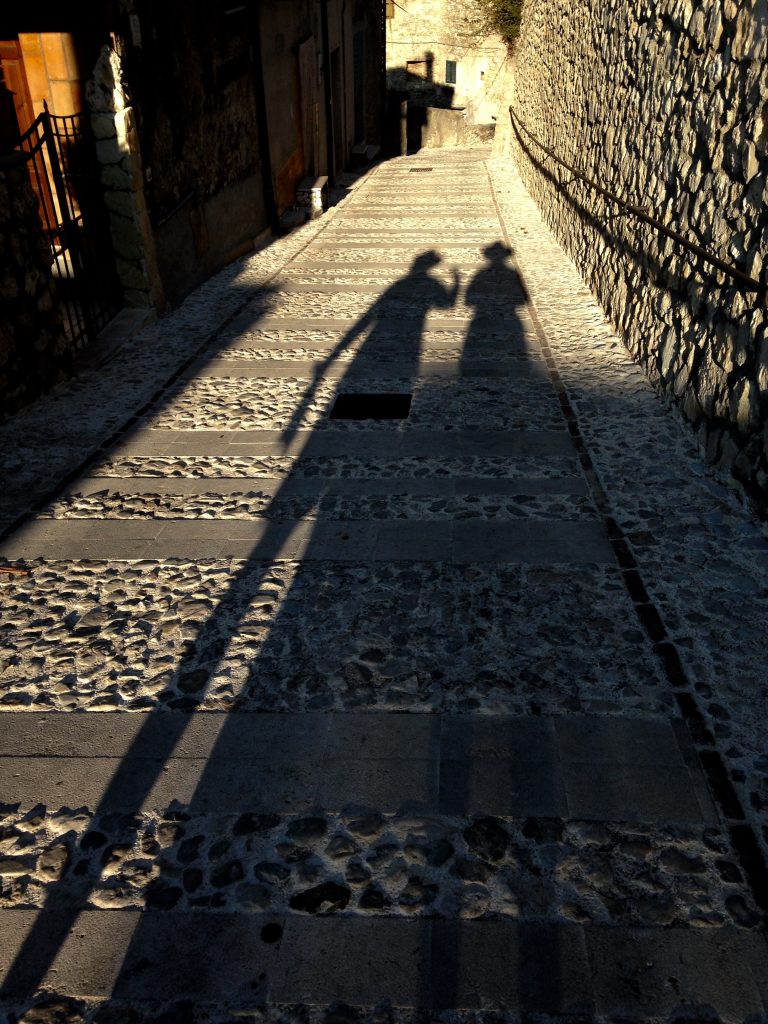 We still had a fair amount of shade, but the sun when it hit us, hit hard. Annie promised shorter, but steep climbs, and at first the “shorter” rang true, but then I started to doubt. By the end of the day…well, read on.

It was hazier today, so the vistas weren’t quite as miraculous as yesterday’s, but it was certainly beautiful. 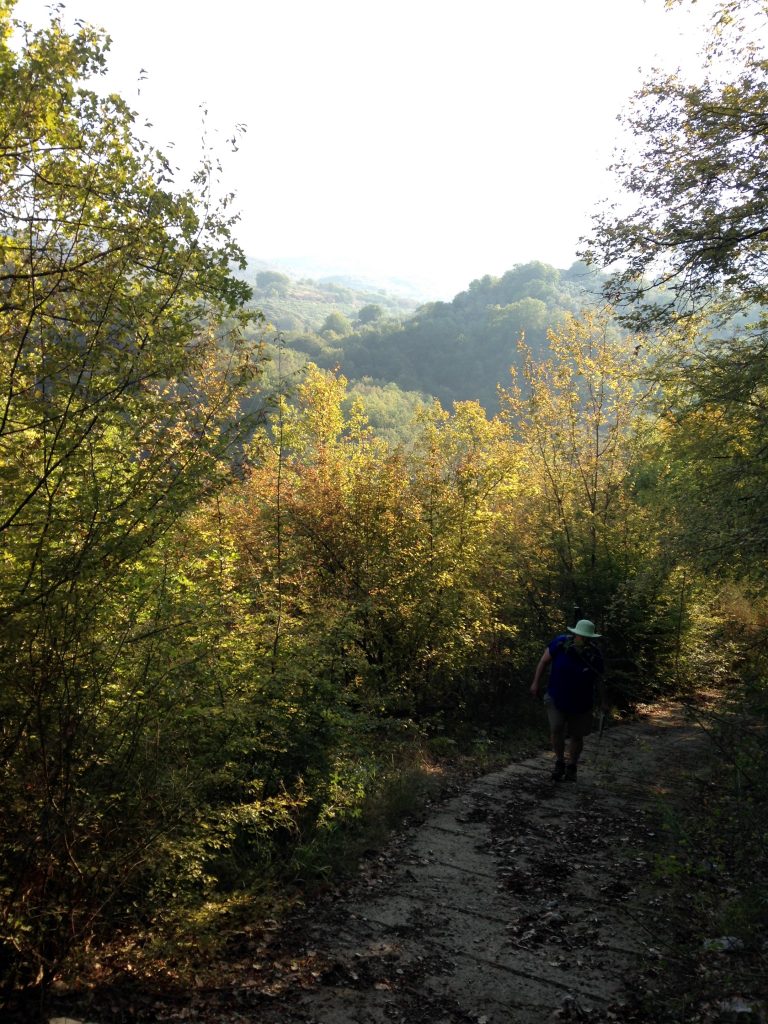 We noticed a LOT of aggressive dog behavior behind fences of farm houses/country estates. At one time, a particularly energetic Rottweiler made me quite nervous, but the chicken wire held after all.

Other noises: cow bells, lizards (which are so common I’ve designated them the squirrels of this area) skittering in the reeds, grasses, rocks, etc. We swear we heard a donkey braying, though it might have been a goose. Roosters crowed, dogs growled, yipped, yapped, barked, and occasionally wined for attention.

Sometimes the path got difficult, but there were long stretches where we actually had nothing to complain about.

Once again we were able to stop at a trattoria in a town on the way for lunch. Panini, Fanta, and chips–ahhh. 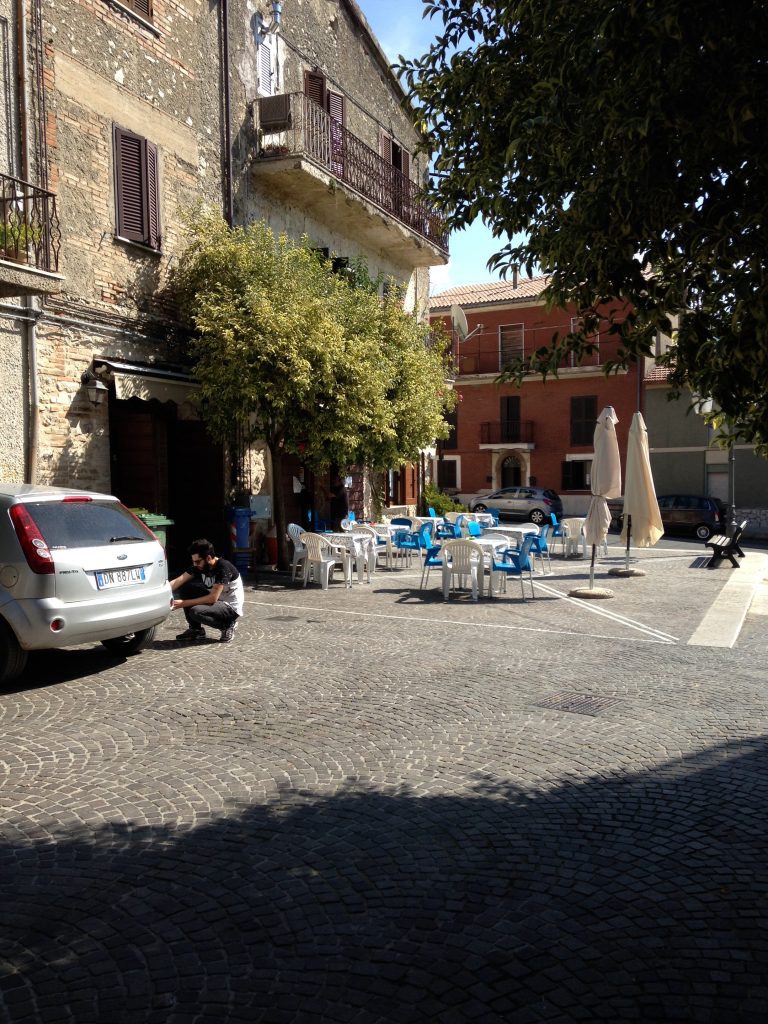 A cute town (on a hill of course!) perfectly timed for a rest 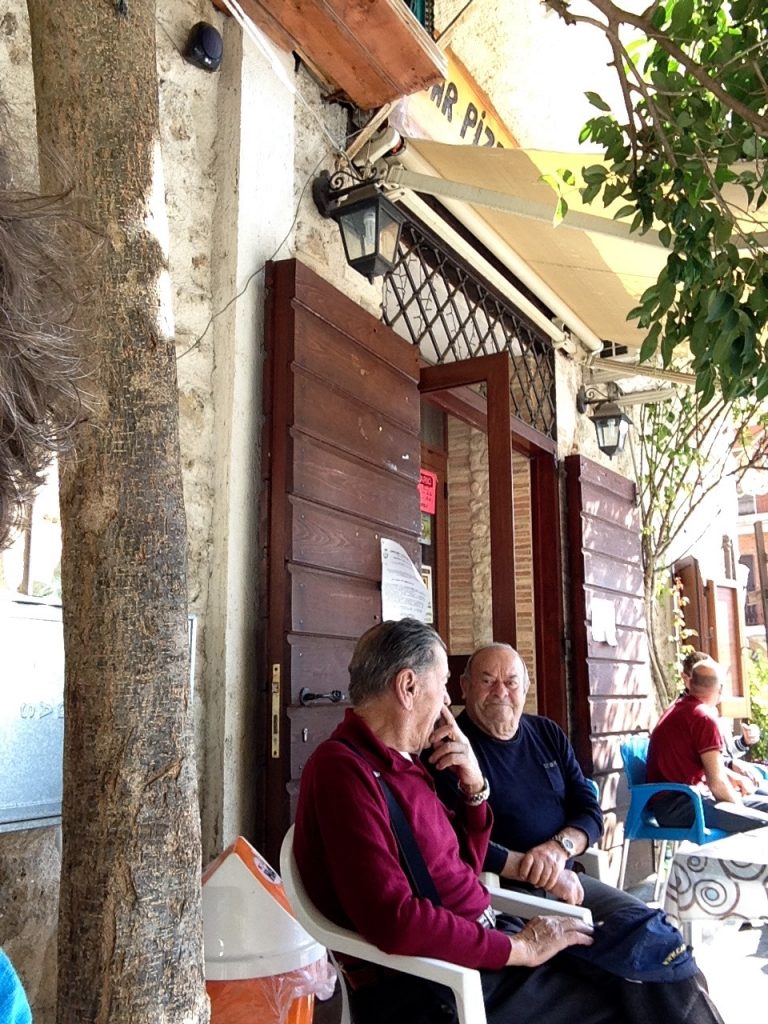 Friendly men next to us at the trattoria

Later at another opportune moment there appeared another bar, complete with a friendly dog and some kids to pretend we could eavesdrop on. A wonderful little break before a grueling uphill. I mention these bars–which might  be called caffes or trattorias, because they are rare!

After a difficult climb,  we were done! Almost. Here we deviated from  via Francesco. Our hotel, it turns out (as Annie gets out the last page of directions), is in a castle–the same castle we kept seeing (very cool) in the distance throughout the day. 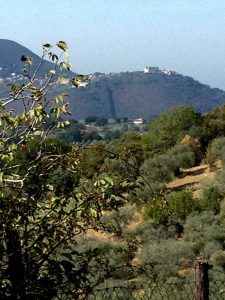 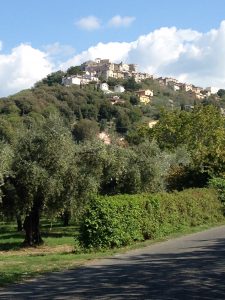 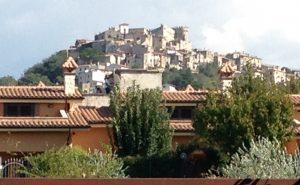 The walk was first along a very busy road and then it cut away to go up a path that was so steep it was almost unbelievable. 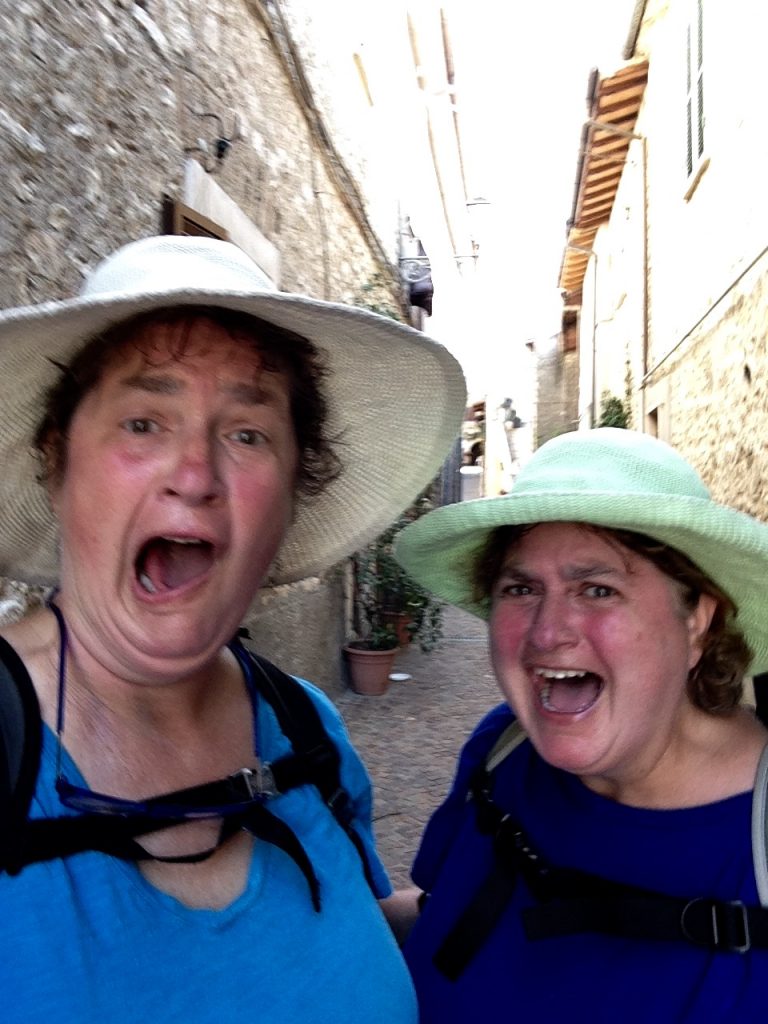 It’s too bad the angle of the incline does not read in the photo, but perhaps you can see the sweat on our exhausted faces, yes? For those who ski, it was like walking up a triple black diamond that kept going on…and on…

Unbelievable anyone could actually drive up or down it, but an elderly woman in a car passed us going down and said “Complimenti” to me several times, to which I said “gracie” and meant it.

But of course the castle neared, and you just can’t beat a castle for …how you say pomp? Ceremony? Grandiosity? Ahhhhh. My American heart swelled. 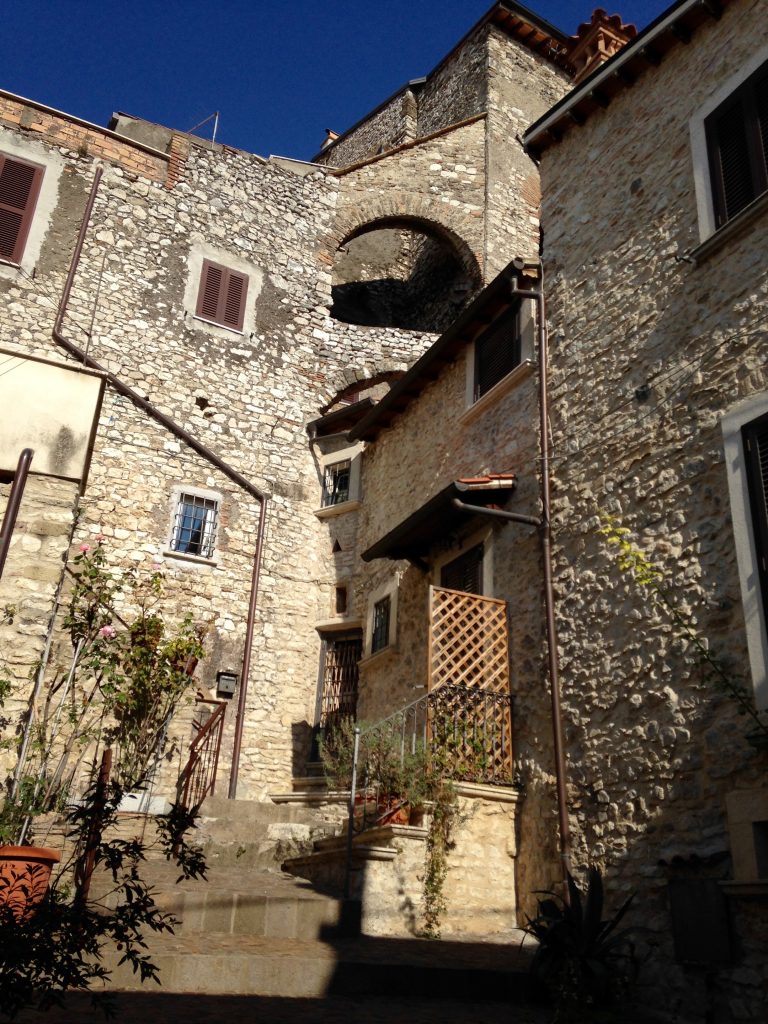 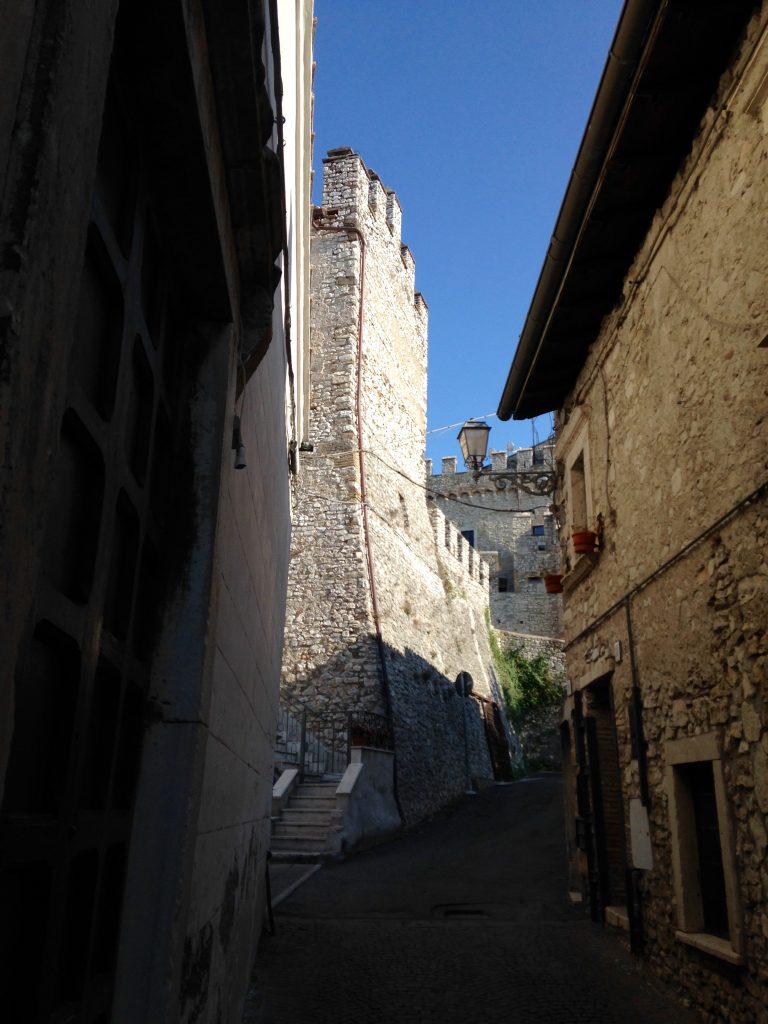 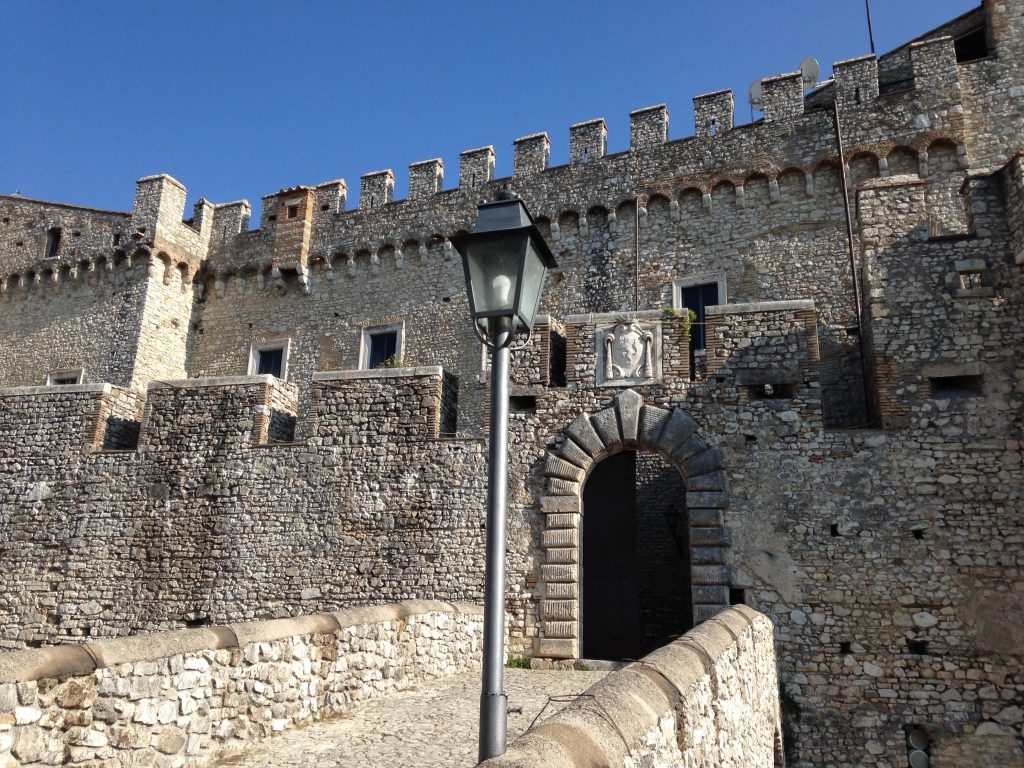 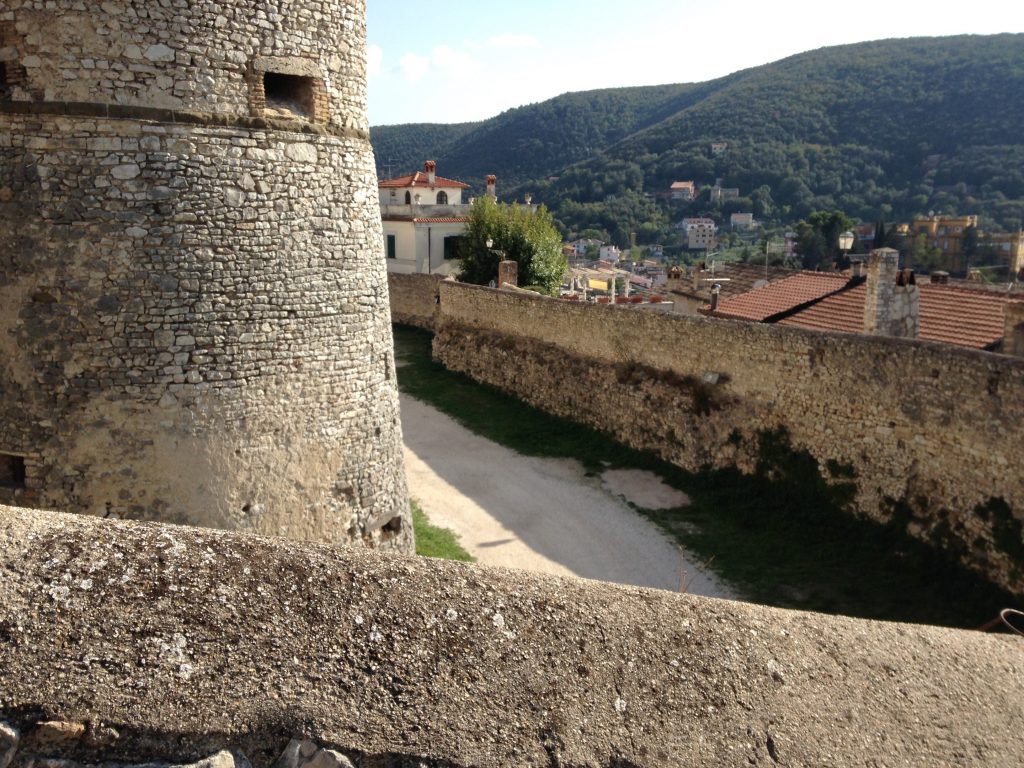 We had to get permission to cross the moat 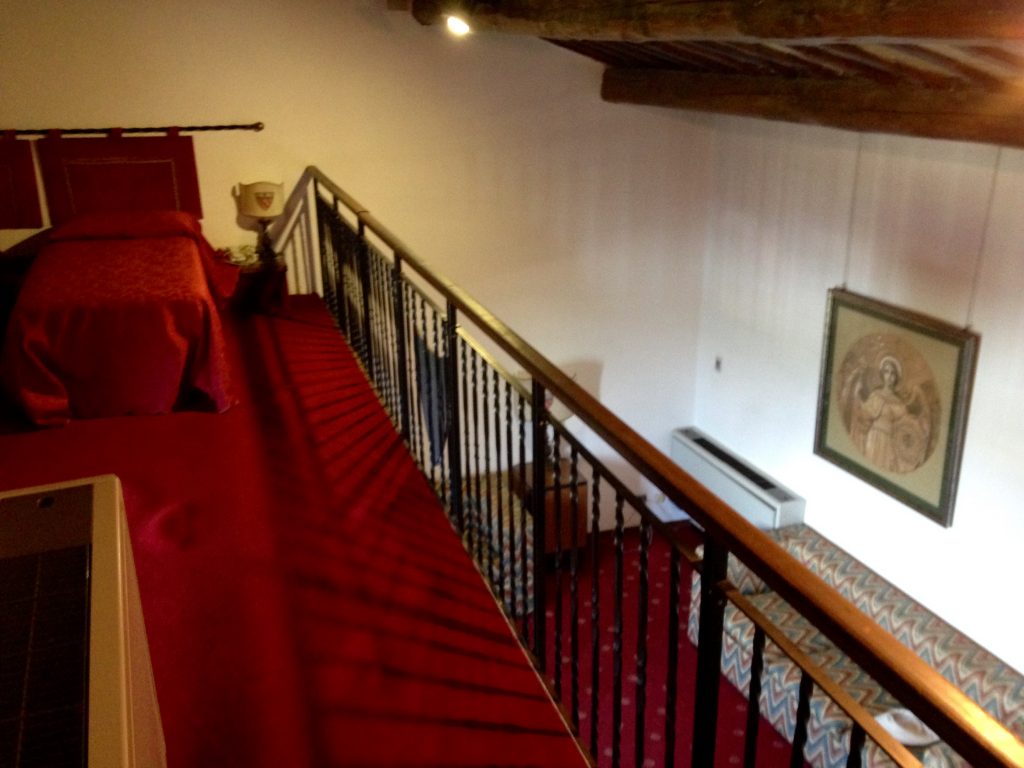 You perhaps cannot see that this a two-story room, complete with its own banquet table. 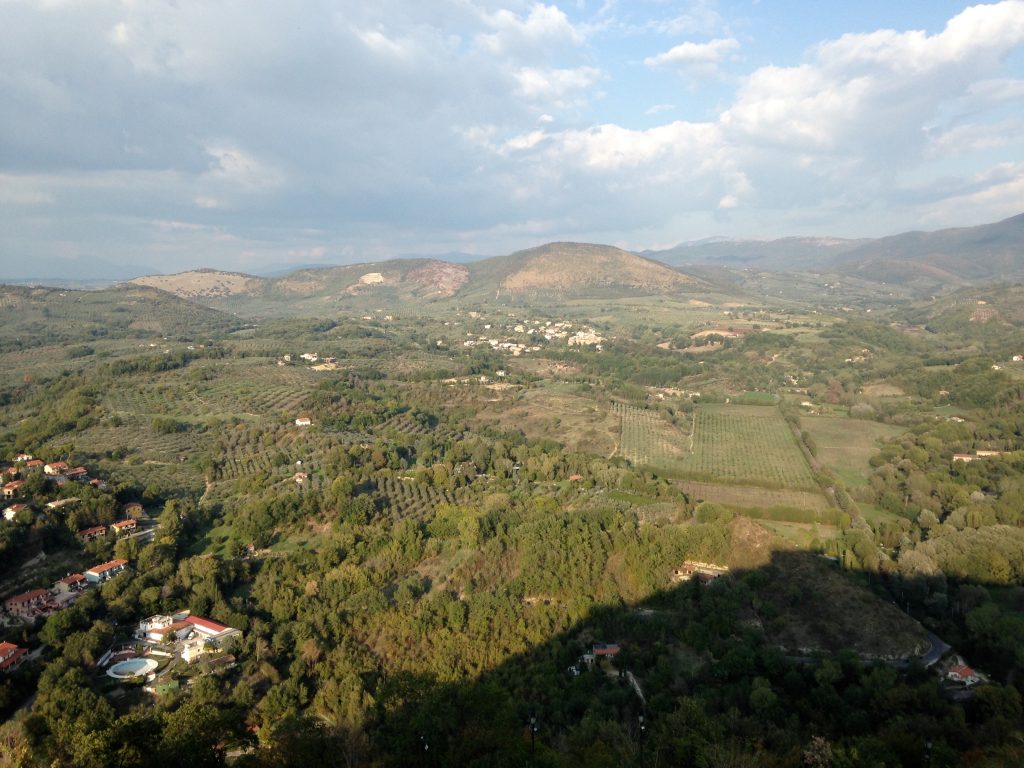 The view from our room. I believe we WALKED that view. Just saying.

We are trading history and terribly cool and nothing free for the tasteless (ie, not to my taste),  uncomfortable,  yet terribly  kind and generous service of the night before. Still, the people here are friendly too! 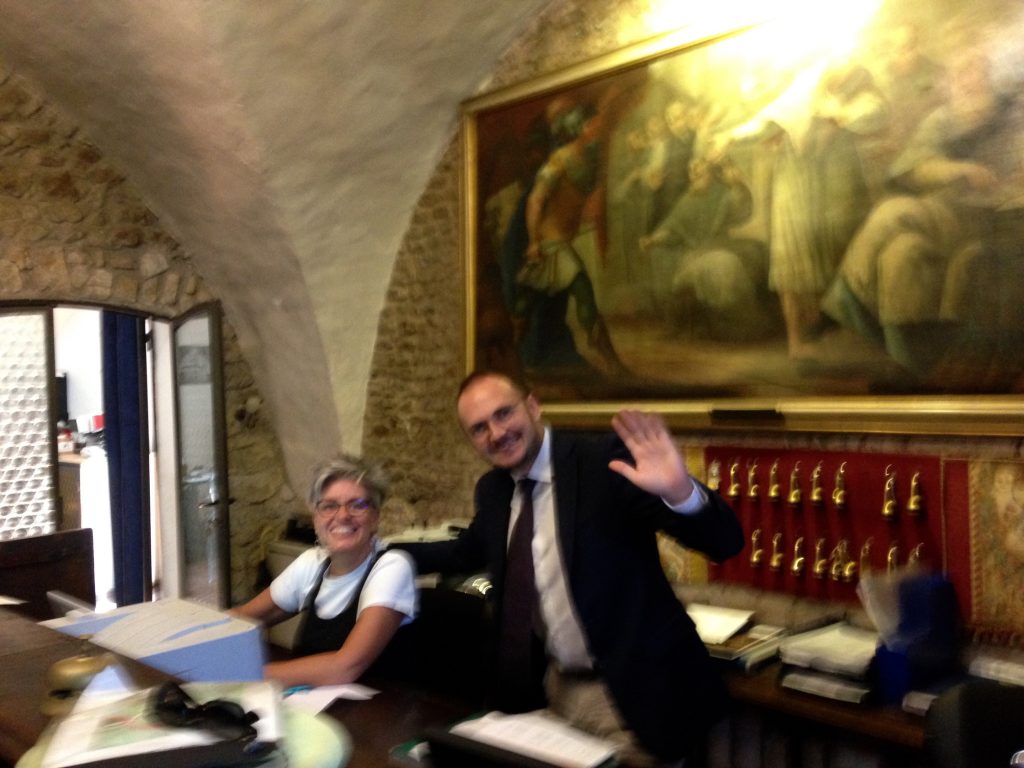 When you enter, the castle does not disappoint 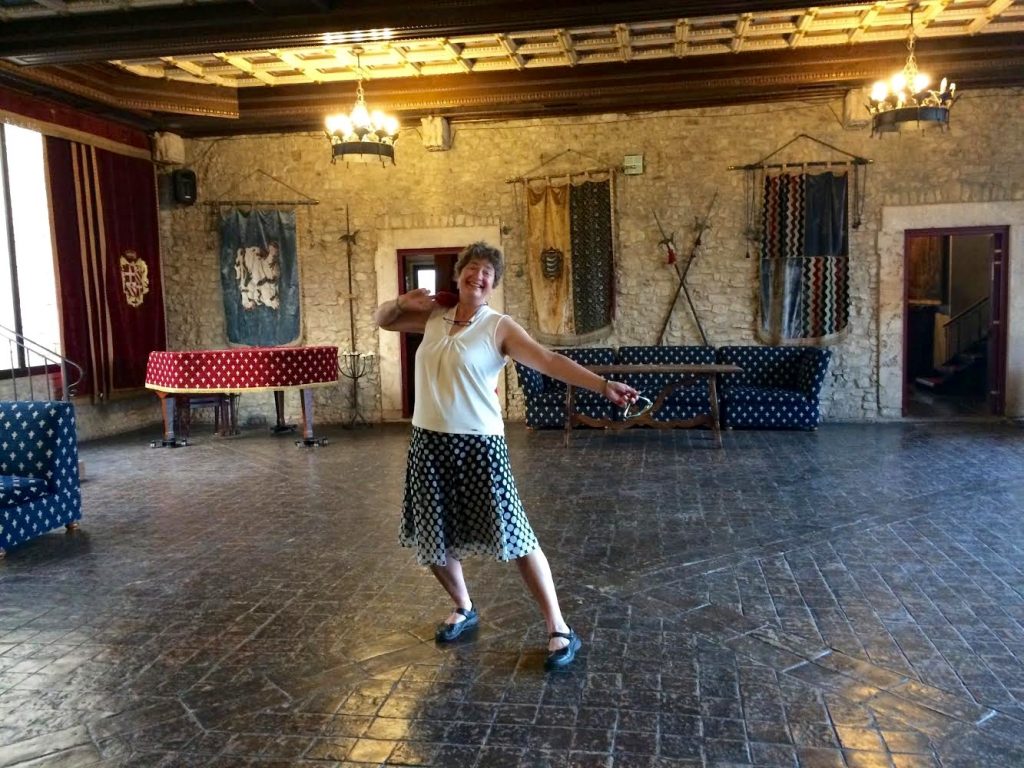 Ah well. Il faut souffrir pour etre belle. I even wore my swishy skirt to dinner, one of the most delicious I’ve ever had. Alas I don’t do food photos. But here I am in my glory, swank as all get out.

1 Response to To the Castle!